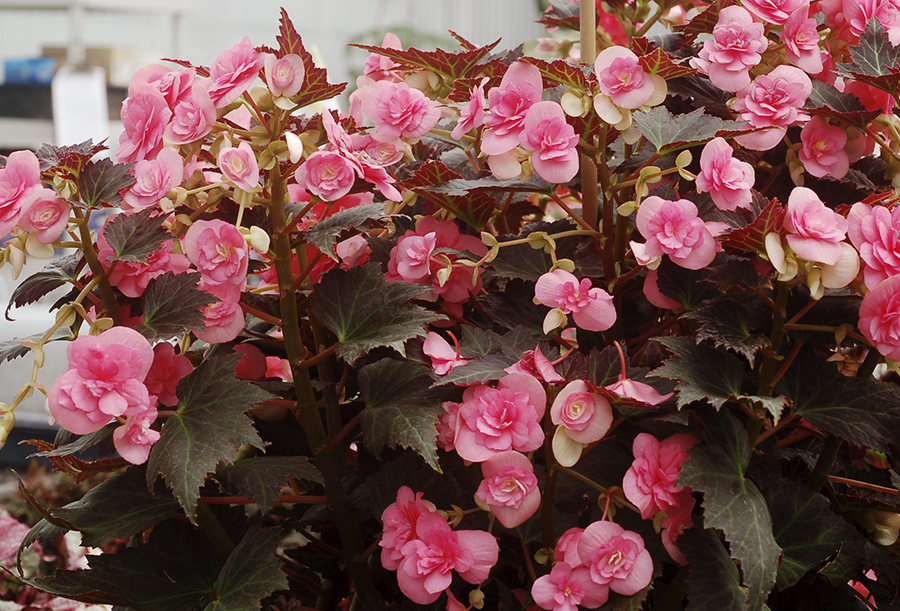 Talking about the Perennial or Annual of the Year every year is a bit like talking about seasonal clothing fashions: there’s usually not much that’s really new, but we find new possibilities in familiar things. Of course, this shouldn’t be too surprising, since the plants are chosen to be reliable performers throughout North America.

And certainly some old favourites are in the spotlight as the 2016 perennial and annual plants of the year. For novelty, though, we do have Canada Blooms’ featured plant for 2016, the Gerbera daisy Sweet series, to add a little spice to the scene.

Perennials are still big in the gardening world, so let’s take a look at this year’s selection, hybrid anemone (also known as Japanese anemone), ‘Honorine Jobert’. This Victorian beauty, bred in France in 1858, is beloved because its glowing white flowers appear in late summer to mid-fall, just when our summer gardens are fading.

They bloom towards the top of tall, leafy plants that can reach three to four feet in height. They like partial shade and moist but well-drained soil. If they’re happy in your garden, you can expect them to spread their rhizomes into a two- or three-foot clump – you may even end up with some to give away.

They’re versatile flowers, good in beds, borders, containers and as cut flowers. Bonus: ‘Honorine Jobert’ is resistant to deer, rabbit and insect pests, as well as diseases. Plant them in early spring, and be prepared to stake them as they grow taller and mulch them in summer and winter.

Another oldie but goodie is the begonia, the annual flower selection for 2016. These critters are a huge family, with a name dating back to 1690.

There are so many begonias, in fact, that you should be fairly specific if you ask for them at your local garden centre. To save space, I’ll skip the fancy Latin botanical names this time and stick to everyday English descriptions of the main types.

Wax begonias are the most common ones you find in small pots or flats. They’re kind of unimpressive to me, smallish plants with little rounded waxy single flowers in mostly pale colours. They put up with sun or shade.

Tuberous begonias are the jazzy ones with big double flowers that look a bit like roses. They’re good in shade and come in splashy colours like red, hot pink, orange and yellow.

Hanging basket begonias look nothing like the previous two. Their flowers hang on cascading branches and have longish petals that form a dainty tubular shape.

Reiger begonias are the sturdy standbys of flower shops. Basically potted flowers, they’re not recommended for the outdoors.

Ornamental-leafed begonias are a little bit confusing. Some are textured, some are dotted, some have splashes of red and deep green, some are mostly silver. Find the ones you like and don’t worry too much about the name.

Watering is the only concern with begonias. Don’t let them dry out, but don’t drown them either. Regular watering close to the ground is best, to avoid rot.

The newbie for the year is Canada Blooms’ choice for its 2016 featured flower, the gerbera daisy trademarked Garvinea Sweet series.

We all recognize gerberas, those brightly coloured, thick-stemmed flowers that look like psychedelic daisies on steroids. They’re splendid cut flowers, but nearly impossible to grow. They tend to poop out in gardens and outdoor containers in our climate.

The new Garvinea Sweet series, however, have been bred to grow outdoors and even flower from early summer to fall. They proved themselves in two years of outdoor trials conducted by the University of Guelph. As long as the soil was well-drained, these plants thrived and bloomed continuously from planting time until winter arrived, say the growers.

These gorgeous annuals take full sun, average (not dry) soil and are good in borders, containers and as cut flowers. I’ve seen four colours – pink, orange, gold, and hot pink – listed by a local grower. They should make nice-sized plants, about 16 inches tall by about 14 inches wide. Ask for them in independent garden centres in our area, like East End, Jay’s, Summerhill Nursery and Sheridan Nurseries. (Be prepared to pay a premium, though, for these fancy-pants plants.)

April is a little too early for annuals, but not too early to make plans and get your garden ready for the season. So get out there and make a place for some of these beauties this year.