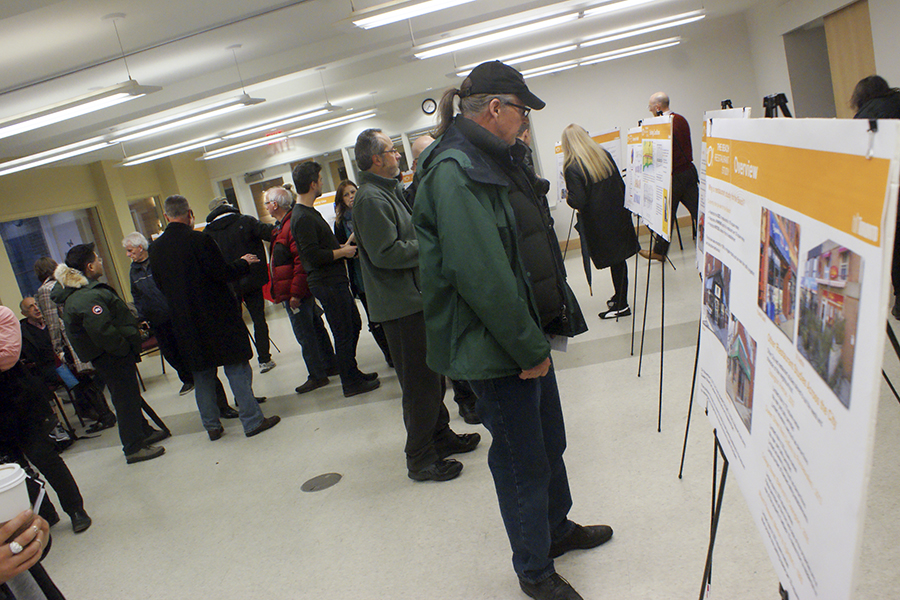 A scene from the March 23 open house at the Beach United Church. PHOTO: Anna Killen

A lot has changed along Queen Street East since 1985 – stores have opened and closed, restaurants have come and gone – but one thing that hasn’t changed is the bylaw governing how those restaurants operate.

Residents and business owners are now being asked if they’d like to see the bylaw revised and updated, or if things are fine just the way they are.

“We’re hearing from the public, restauranteurs, business owners, property owners, what they think. Do they want to bring it into 2016?”

Toronto’s City Planning and Economic Development and Culture divisions are leading the conversation, which looks at the area on Queen Street between Woodbine Avenue and Nursewood Road.

The information meeting, attended by dozens of Beachers over two hours on a Thursday evening, was billed as the start of the discussion.

“Usually when we do studies it’s because there is a problem that’s emerged in some communities between restaurants and bars and residents. A lot of time studies are a reaction to that kind of problem,” said city planner Kyle Knoeck.

“That hasn’t been a real problem recently here – there have been some specific instances at times in the past, but that’s not a problem that the Beach has had recently.

“The question is, could the restriction be reconsidered and would that actually be a benefit to business and improve the community? Are things working fine the way they are and should we stick to what we know and what’s working?” Knoeck said, noting that those are just two of potentially several possibilities.

McMahon said that the push for an updated study stemmed from worries about shuttered Queen Street storefronts and what could be done to make the area more viable while still maintaining its character.

When reviewing the 30-year-old guidelines, she was surprised to discover that the Beach has the smallest restaurant size restrictions in the city at 165 square metres. Most Queen Street restaurants are 165 square metres or less, and the few which are larger existed before the bylaws were enacted.

“City staff didn’t even recommend that size in 1985, but the local councillor [wanted that],” she said. “People were worried about different things back then – bars, worried about a ‘Wasaga-Beach-y’ feel to the area. But I think we’re in a new time and a new age and I think it’s time to be revisited.”

She noted that she has heard from West End restaurateurs who have backed out of plans to open locations along Queen because of the size restrictions.

“So that’s a problem,” said McMahon. “We want to open up our empty storefronts to our businesses to have a more viable area, so if this is one of the hindrances, I would be happy to revisit that.”

People at the open house were asked to fill out a survey to provide feedback on what they thought of the information provided – the advantages and disadvantages to the existing restrictions on parking, patios, and restaurant size, as well as the demographics of the area.

One resident at the meeting, who gave his name as Angelo, said there are too many “copycat” restaurants along Queen Street who follow the trend of the day and that he would like to see more variety in the area.

Beach Village BIA board member Adam Smith would like to see some of the rules changed, particularly with regards to required parking spaces for restaurants.

But he thinks the neighbourhood is ready to revisit these issues.

“One, I think the demographics have changed since that happened. Two, it’s finally become obvious that these things are hurting more than they are helping.”

“The businesses will be behind it for sure, that I can say,” he said. “Residents, it’s a mixed bag. I think most of the newer residents who moved here within the last decade have no idea about any of this, so I think they’d probably be for it. But the ones who lived through it and pushed for this to begin with and are still around, they’re still going to push to keep it the way it is.”

City staff will now review the feedback and do some more consultation and research. If there is interest in changing the bylaw, a community consultation process will follow and the decision would ultimately be made by city council.