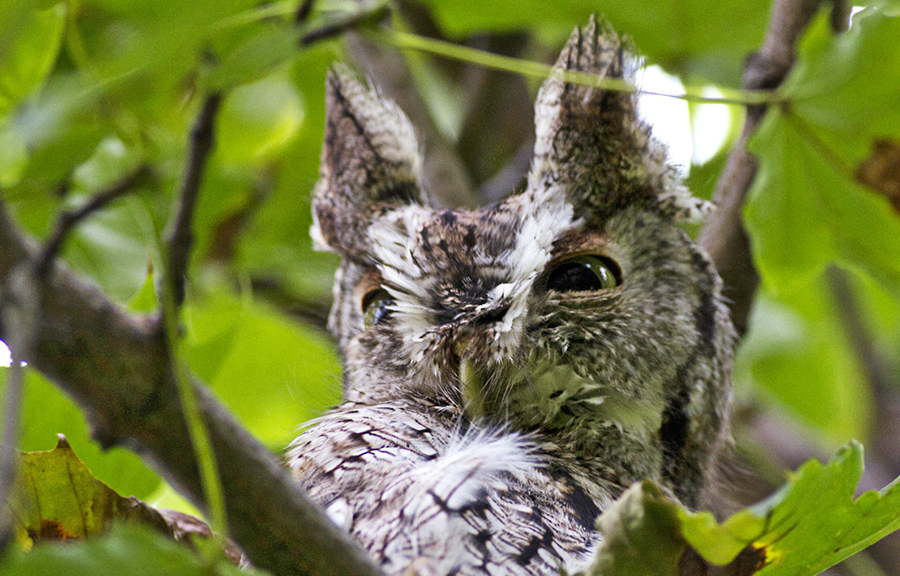 Ann Brokelman considers herself lucky to have a screech owl sharing her property. Photo: Ann Brokelman

I’ll ask you all a question that people have been asking me for years: if you could have any wild animal live in or regularly visit your backyard, what would it be?

A deer? They are certainly beautiful to watch, though I feel they’d do a number on my gardens.

A bear? As exciting as that would be, I’ll assume one of my neighbours would take issue.

Maybe something smaller, like a fox? Now that’s an animal I would love to see every day. Unfortunately – and luckily – we can’t control what wildlife will be in our lives. We can however, try to encourage certain animals to come by to visit.

A few years back, for my birthday, my husband Erle bought me a sweet little screech owl house. I loved the idea, but tried not to get my hopes up that an owl would ever move in. I knew that, just like with most bird houses, the most likely resident would be a squirrel.

It took longer than a year, and several squirrel tenants, before I happened to catch an odd-looking shape sticking out the hole of the box. I yelled for Erle and we both watched an owl actually claim the box for his own. When we felt confident he was going to stay a while we started calling him Mr. Gray, mostly for his eternally grumpy face, and began planning our days around his predictable waking and hunting flight times. Who needs prime time TV when you have an owl in your yard?

Over the years we’ve seen Mr. Gray joined by a female, though no babies have yet to come from this union. Maybe they’re just friends for now.

I actually thought something might have happened to him this past year as he traditionally arrived and settled into the box in December, and hadn’t made any appearances through January. Imagine my surprise one day in February, at 5:30 p.m. (his normal time), when I looked up to see him fly out of the box and land on a tree in yard. As I was writing this article I glanced up at 6:32 p.m., just in time for Mr. Gray to pop his head out.

Eastern screech owls (megascops asio) are just the size of a pop can.  They are 16 to 25 cm in length and weigh about 120 to 240 g.  There are three different colours of screech owls. The most common is the gray morph, followed by brown and red-rufous morph. Why those colours? Grey morphs have good camouflage in the barks of hardwood trees, while browns and red-rufouses hide in pine trees or in the colourful leaves of deciduous trees.

All Eastern screech owls have bright yellow eyes. The Eastern screech owl’s call is an eerie tremolo with a descending whinny-like sound. They also produce a monotone purring trill that lasts 3 to 5 seconds. I was thrilled to hear this sound the other night while out at the front of the house. It is a haunting sound right out of a scary movie.

How do you build a screech owl nest? I recommend you buy one at your local nature store, or check online for plans from Audubon.

Make sure when you put up the nest you put some shavings inside the box. This will help prevent the owl’s eggs from moving around.  Good luck, and I hope you get to host an owl as well.

Frankly, I have always wanted to see a wild cougar or bobcat… but it never occurred that it was possible to attract an owl to a back yard, and that they are as small as a pop can.

Brian I know of many people who have owls visit their nesting box. It is a lot of fun watching them. Just wish they had babies in box.

I am with you about seeing bobcats and Cougars. Someday.