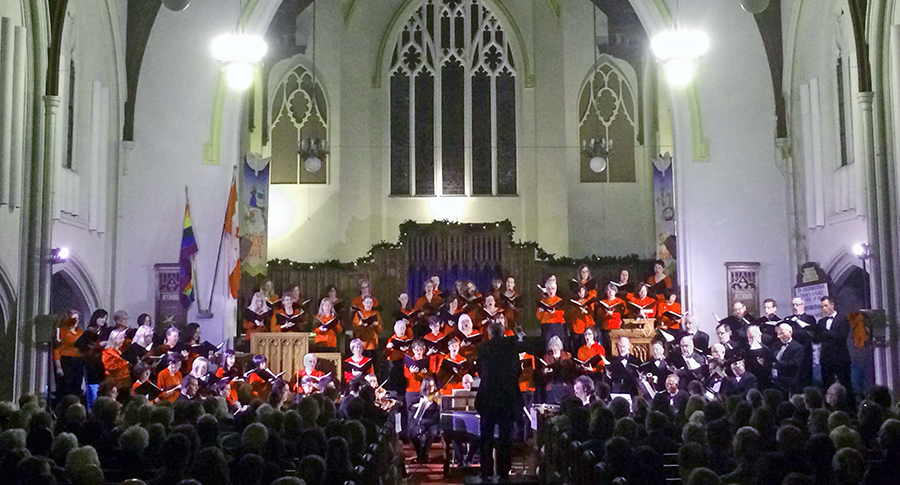 Beacher Eileen Thalenberg’s new television documentary, A Jihadi in the Family, will air on CBC’s Firsthand this Thursday, March 24.

The hour-long film tells the story of Calgary’s Christianne Boudreau, who was shocked to find out her 22-year-old son Damian had been killed fighting for ISIS in Syria. An estimated 100 young Canadian men and women have travelled to the region to do the same, with 17 killed during the fighting to date.

Boudreau found herself shunned and stigmatized as the “mother of a terrorist,” and founded the Mothers For Life organization in response to her situation.

A Jihadi in the Family explores Boudreau’s story, as well as delving into the how and why of young people in western countries being recruited by ISIS, and the effects their decisions have on their families.

The film is written and directed by Thalenberg, who also co-founded its production company Stormy Night Productions.

Under the artistic direction of Mervin W. Fick, the choir will be joined by a professional orchestra and guest soloists (soprano Jocelyn Fralick and baritone Max van Wyck).

The concert gets underway at 7:30 p.m. at the church, 975 Kingston Rd. Admission is $20 in advance through a choir member or the website at torontobeachchorale.com, or $25 cash at the door. Youth 7 to 18 years old are discounted to $10 in advance or $12 at the door, and children under 7 are free.

The Toronto Beach Chorale is a 60-voice auditioned concert choir in its eighth season, dedicated to providing high-calibre music with an annual series of concerts in the East End.

This mystery, set in 1605 London, draws in well-known Shakespearean characters including Viola, Richard III, Falstaff, Iago, Mercutio and “a certain merchant from Venice.” Detective Birnam Wood is tasked with finding his partner’s killer, while discovering the secret behind a dagger known as the Maltese Bodkin in this “who hath done it.”

Beachers involved in the production include Ron Remigio, the designer and artist behind the Tudor England sets, and actor Drew Smylie, playing both Richard III and Rosencrantz.

Swan has released two albums and an EP, and will perform her own songs from those albums, along with favourites from Gordon Lightfoot, Joni Mitchell, Bruce Cockburn and Leonard Cohen. She will be backed by violinist Aleksandar Gajic.

Along with airplay on CBC and in short films, Swan has performed on stages with Liona Boyd, Veronica Tennant, Sylvia Tyson and Tanglefoot. She has earned praise from Tapestry New Opera founder Wayne Strongman for her writing.

Tickets are $15 in advance, available at www.swan-at-spuc.eventbrite.ca or the St. Paul’s office at 416-261-4222. Proceeds will support the church’s community outreach programs in Cliffside. The show starts at 7:30 p.m. and St. Paul’s is at 200 McIntosh St., near Kingston Road and Midland Avenue. Find out more at bri-anneswan.com.

Filmmaker and visual humourist Cameron Tingley will present his series of short films called Life As We Know It on Wednesday, April 6 at the Beaches branch of the Toronto Public Library.

The evening consists of a 90-minute presentation, including the films and audience discussion in between. The films were made with the help of The Flying Spot Players, a Toronto-based theatrical troupe. Each short work offers a humourous, yet thought-provoking look at some of the issues facing the world today.

“We are losing sight of the relationship between our individual actions and the general condition of our culture and our environment. These little movies are meant to put a face on those relationships,” writes Tingley.

Pollution, advertising, popular culture, electronic communication, consumerism, and social etiquette are just a few of the topics broached in Life As We Know It. The films have been screened in libraries, cafés, art galleries and more throughout Toronto, as well as in London, Ontario and New York City.

Life As We Know It runs from 6:30 to 8 p.m. at the Beaches Library at Queen Street East and Lee Avenue. Admission is free. For more on the Flying Spot Players see bitly.com/flying-spot-players.

Beach Jazz and Reflection is back on April 2, when Laura Fernandez will sing at Beach United Church, backed by Don Naduriak on piano and Joaquin Nunez Hidalgo on drums.

Fernandez is a multi-talented performer and artist. Born in Madrid, Spain, she counts among her many skills and job titles singer, songwriter, pianist, music producer, painter, illustrator, designer, and 91.1 Jazz FM radio host and producer.

The theme of the Jazz and Reflection set will be ‘New Beginnings.’ The show runs from 4:30 to 5:15 p.m. on Saturday, April 2 at Beach United Church, 140 Wineva Ave. just north of Queen Street. There is no cost, but a freewill offering will be collected.