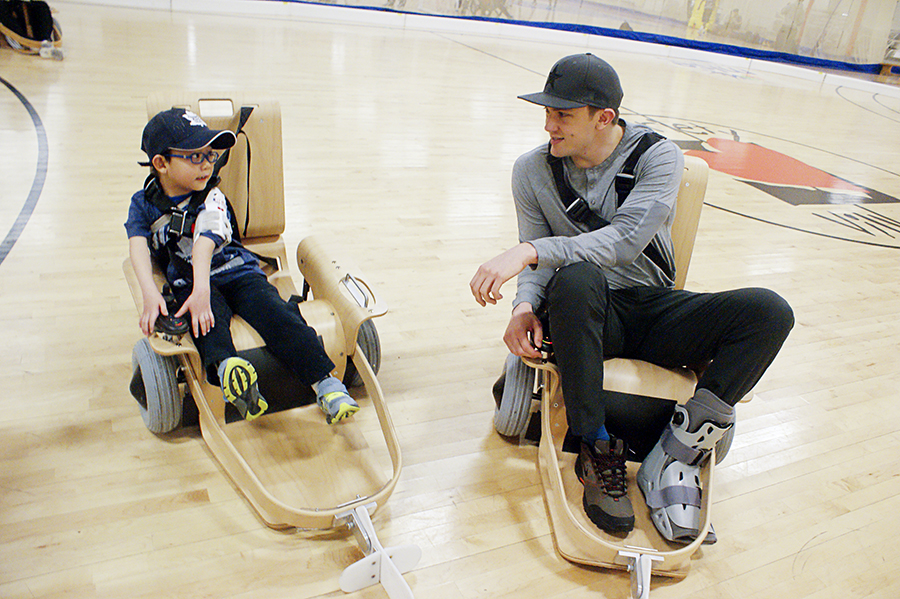 Liam Marriage, 5, shows Toronto Maple Leafs forward James van Riemsdyk how to make moves on Variety Village’s new volt hockey chairs. One move was a quick spin and stop, which he hadn’t named yet. The other, called “the worm,” saw him squiggle across the court. PHOTO: Anna Killen

Five-year-old Liam Marriage’s voice rises above the hum of excited voices and battery-powered motors buzzing around court two at Variety Village on March 16.

He’s gone in a flash, his new friend, an injured Maple Leafs player, sputtering to catch up as he figures out how to control one of Variety Village’s newest pieces of equipment – an electric hockey cart that looks like an Ikea chair on wheels, with a scoop to control a ball jutting out of the front. The machines are used to play volt hockey, a sport that’s big in Denmark and other European countries. With the help of the Danish consulate, the charity is set to launch the first league in Canada with a kickoff event planned for early April.

Liam is one of six kids who were the first to try out the chairs, delivered earlier this month, at the March Break volt hockey camp at the East End sport complex last week. The group learned from the best – Danish Volt Hockey champion Nicklas Charlton was in town teaching the new recruits, as well as his assistant Mads Seldal and Allan Johansen of UB-Let, creators of the chairs.

By the time Beach Metro News visited, three days into the camp, the kids were already naturals on the zippy machines, showing off spin-o-ramas and scoring goals to a delighted crowd that included Toronto Maple Leafs coach Mike Babcock and some of his players.

“They’re having a great time,” said Babcock, after taking a spin. “It’s unbelievable. Perspective. It’s important to understand what value this creates … and it’s harder than it looks.”

The sport is similar to sledge hockey, but comes with added benefits for people with limited to almost no mobility. Because they are joystick-operated by the user, the athlete is totally in control of her game – something that builds confidence and provides an experience many disabled kids have not experienced before.

“The great thing about these chairs, no matter the disability, if a child has use of his fingers, his hand, or palm, even, to operate a joystick, that’s all they need,” said Variety Village’s Lynda Elmy. “As an inclusive, integrated facility, there is a small group of kids that do not do a lot of things independently, and this allows them complete independence. The only thing we need to do is get them in the chair. The control mechanism is on the right, but it can move to the left, so it allows for a lot of opportunities. We can cater to the needs of the individual. It’s really cool stuff.”

She said the arrival of volt hockey in Canada has been in the works for a couple of years. “About two years ago the Danish prince and princess came over to Canada and launched the introduction of the chair,” said Elmy, noting the consulate was interested in the fact that Variety Village offers so many adapted programs and sports for kids with disabilities.

“Apparently when the prince of Denmark was a young boy they made a coin commemorating his birthday, and then when they sold them they used all of that money to fund building the chairs.”

The sport’s since taken off in Europe – and it’s no wonder why.

“It’s so fast,” said Liam, when asked why he likes the sport. His mother, Jo, said that Liam, who has a condition called arthrogryposis, which makes it difficult for him to bend his joints, is used to being one of slowest in the group – but these chairs allow him to fly. “He’s like any other five-year-old,” she said of her quick-witted son. “Recess is his favourite subject.”

He’s loved hockey since he was two, she said, and this league means he can finally play the sport that he loves.

It’s that Canadian love of hockey that sparked the Denmark volt hockey contingent’s interest in expanding the sport to Canada.

“If you make the connection to ice hockey, then you’ve got a lot of kids who wanted to play hockey but they couldn’t, so now they can play volt hockey.”

He said the sport is different from traditional hockey, in that there’s less contact.

“You’re not supposed to hit each other, so everyone can compete without getting hurt, so it’s not that physical,” he said. “It’s very technical, you really have to have a plan, there’s a lot of screening going on. If you know how to make all of the screenings it looks very easy, so that’s the whole tactical thing.”

The Variety Village kids “are just great,” he said. “They catch up so quick at this age. It’s a good time to introduce something like this because they just take everything so naturally. They don’t think about it too much, they just react.”

That was certainly the experience for Liam.

But he said he had gotten better – and increased his speed up to the third level, out of five – by the third day. As a fan, he liked meeting the Maple Leafs and their coach – but seemed to like even more the fact that he was the expert.