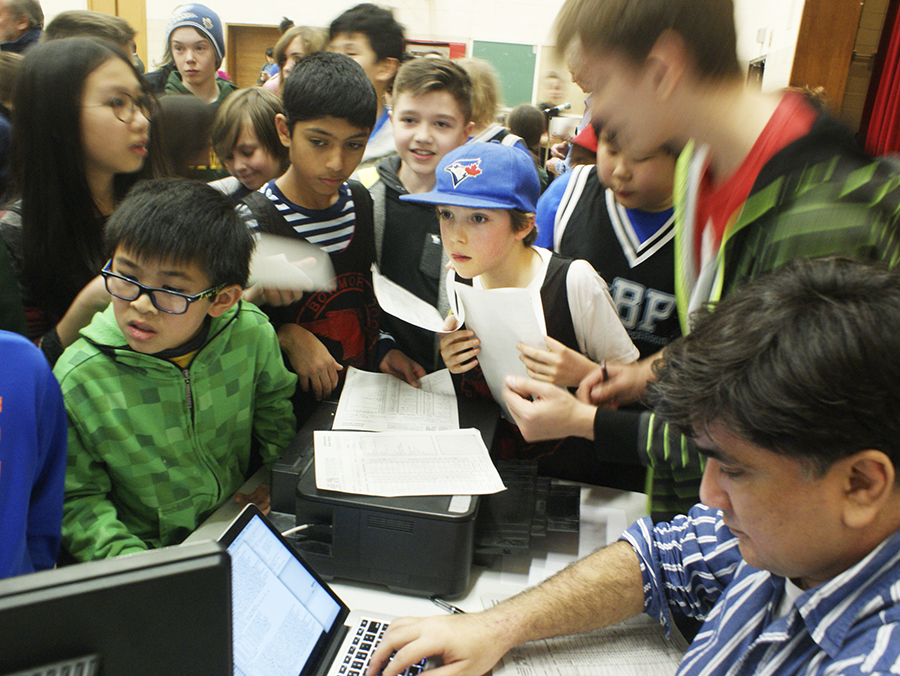 Success was in the bag for Bowmore Road Public School at the recent Toronto Scrabble Championship city qualifiers.

Five two-person Bowmore teams came out of the eastern finals, held at Bowmore March 8, with a spot locked down for the city tournament, joining three Bowmore teams that qualified at a separate tournament. The top 10 pairs from grades 5 to 8 from both the east and the west regions will compete March 30 at Bayview Glen to see who will go onto the North American School Scrabble Championship in Massachusetts at the beginning of April.

Bowmore Grade 8 students Mireille Parsons and Zoe LP finished first at the tournament – a surprise for the team who hadn’t played together in two years.

“Crazy,” said LP. “We came here just wanting to get into the city finals and we came out with first.”

“Which is amazing because we weren’t really sure how it was going to turn out, so we’re happy it turned out well,” added Parsons.

The team said they practised a lot leading up to the tournament – doing anagrams with their school Scrabble team and studying two-letter words.

“I studied the two letter words like my life depended on it,” said Parsons.

The March 8 tournament was an exciting day for the students at Bowmore and the several schools visiting for the competition. Intense whispers between players during game time broke into cheers as the results came in, and Bowmore students not involved in the competition poked their heads through the gymnasium doors to see how their classmates were doing on the board.

“Everyone’s been coming and saying ‘How are you guys doing?’,” said Bowmore Grade 5 Eddie Dunlop. “Luckily we’ve had nothing but good news all day.”

Dunlop and his teammate, Grade 6 student Joey Machin, had an eventful final game against the team they needed to beat in order to make the city tournament. Their rivals were in third and they were in eighth, and the Bowmore students needed to win in order to switch places with them in the standings.

“Bragging rights and city finals,” said Machin, when asked what the win meant.

The duo are big on strategy – they say parallel plays, where you play a word up against another word, are their favourite – and that they practised and crammed leading up to the tournament.

But the team found themselves in a position anyone who has played Scrabble will recognize.

“We kept getting vowels,” said Dunlop of the most challenging part of the tournament. “So we got some good vowel dumps. A lot of parallel plays you can use vowel dumps.”

The two are looking forward to the city tournament. Machin has been once before, but it’s Dunlop’s first time.

“I haven’t won at all until this year, and I’m really excited,” he said.