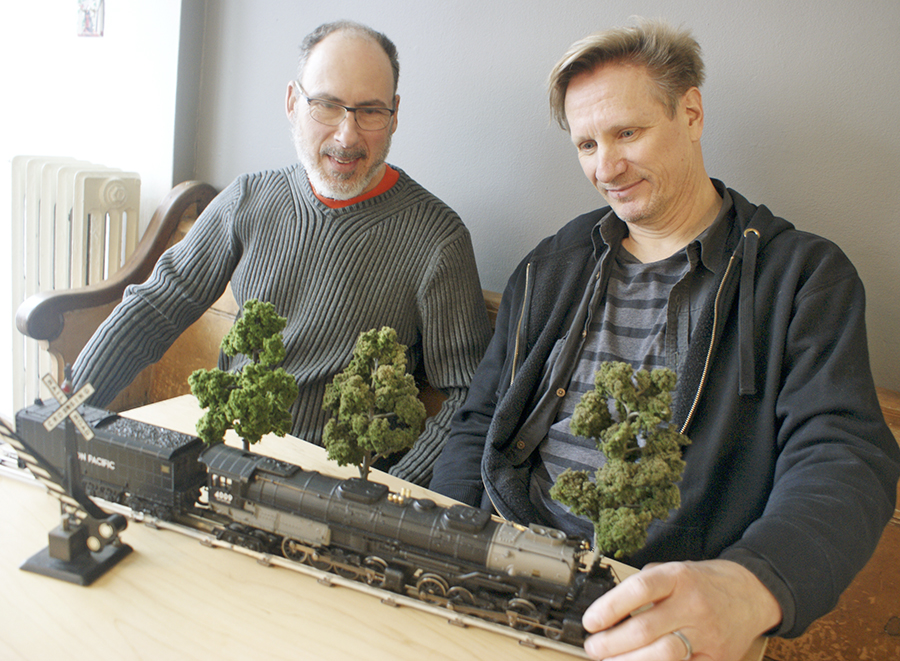 Local train enthusiasts Darrell Martin and John Paddle are laying the tracks of expansion when it comes to their hobby club, hoping that a recent filming gig combined with community outreach will lead to more opportunities to share their unique set-up.

As Greater Toronto Toy Trains, or GT3 for short, Martin and Paddle have been travelling to model train and toy conventions around the GTA for the past two years, where they set up their O-gauge rail and locomotive display and present their hobby to the masses.

The two-man team met four years ago as part of a larger club, realized that their interests were aligned, and decided to break off and form GT3.

“The general hope is to keep encouraging more and more families, more and more guys our age or younger to get involved, because it shouldn’t be just an old man’s game,” said Martin.

“It has to do with nostalgia and a simpler time, the notion of you’re going somewhere, there’s an adventure,” said Paddle.

The club’s adventure has recently been gaining steam, with February a particularly busy month for the club.

They spent Family Day at a local church as one of the main attractions.

“We got way more people than we expected,” said Martin, adding that the club would love to do more community events like the Family Day event.

Days later, GT3 found themselves in the centre of a 60-plus-person commercial shoot that utilized GT3’s well-honed ability to set up their displays in remote, non-traditional and smaller settings

“This was a complete, out-of-the-blue (experience), said Martin. “The premise of the commercial has to do with the space that can be saved by (switching to more efficient and space-saving energy appliances) … You can build that train set you’ve always wanted.”

Martin and Paddle like to teach people that you don’t need a huge amount of space to start with trains. Paddle sets up intricate displays in his apartment, on smaller tables, and shares those videos on YouTube.

The exhibits are only one – small – aspect of train modelling. Preparation, fixing, online forums, and hunting for bargains are all part of the game.

The bargain hunting is important – new digital locomotives can cost thousands of dollars, part of the reason GT3 works with a lot of vintage equipment.

“We have a lot of variety in the display. It’s not all super realistic stuff,” said Paddle. “Because we build it on-site every time, we can change it into whatever we want. And we do that – we change the tracks, the style – so it’s more enjoyable for us creatively.”

Creativity is one of the main drivers as to why Paddle and Martin are drawn to their hobby.

“There was a train set at my grandpa’s when I was a kid, and then as an adult I went to one of the conventions, and then eBay and the Internet started,” said Paddle. “There’s all these aspects of that hobby that appeal to me. It’s creative, it’s mechanical, it’s like moving art.”

And sharing it with the public is a major selling point, too.

“There’s an entertainment factor there,” said Martin. “You’re actually entertaining adults and kids, so it’s not just you running the trains in your house.”

“There are a lot of people who have things in their basement, and that’s great, but you don’t get the satisfaction of sharing it so much, in big numbers, like we do at the shows,” said Paddle.

But they don’t intend to turn it into a full-time gig anytime soon.

“Anybody that does it as full time is retired, and both of us are still about 10 years away from that,” said Martin. “But it unfortunately does become a little bit of an obsession.”

The commercial we mentioned in the article is finally up and running, playing on TV, in theatre screens and on Youtube. Check it out here: https://youtu.be/6Ba6TZpQU5A