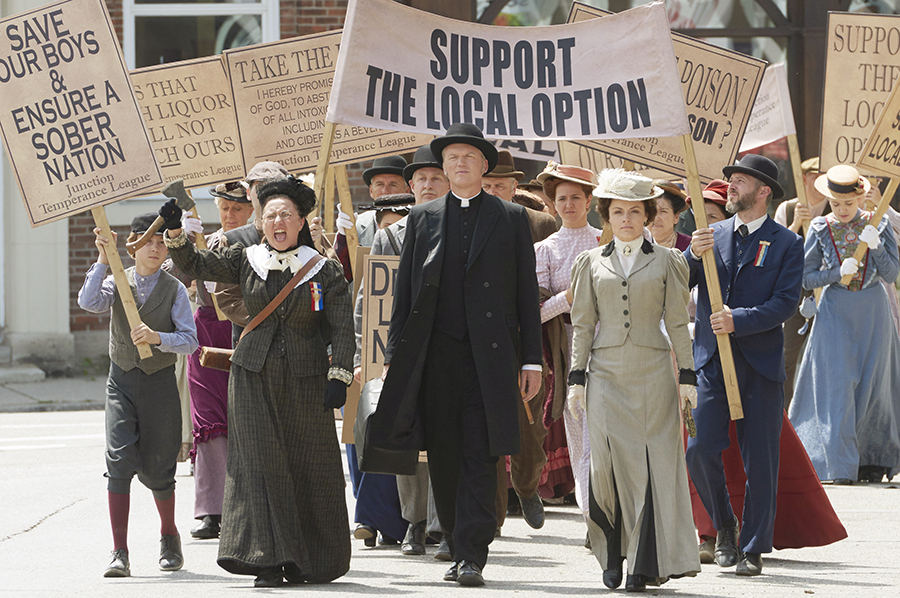 Arwen Humphreys' character Margaret Brackenreid, at right, has seen an increase in airtime on CBC's Murdoch Mysteries as fans have latched onto her narrative. PHOTO: Courtesy CBC

Jennifer Hooker is nothing if not diplomatic when dishing about her love for the television show Murdoch Mysteries.

A member of the Murdoch Mysteries Appreciation Society, a 7,000-strong Facebook fan group with a GTA offline meetup group devoted to the CBC historical mystery drama, Hooker, an Upper Beach community worker, says there is no way she could choose a favourite character.

“This sounds so cliché, but I honestly could not choose one,” Hooker said. “One of the things the show does really well is every character is important, every character plays a role. Of course it wouldn’t be a show without William Murdoch, the detective, but they all bring something.”

Moments later, however, a shift.

“Really it would have to be tied for Julia and Margaret,” she said, after giving the question some thought. Pathologist and psychologist Julia Ogden, played by Hélène Joy, is the female lead on the show. Margaret Brackenreid is a recurring character played by Beacher Arwen Humphreys – her role started off small, but has grown as fans have latched onto her narrative as the wife of Inspector Thomas Brackenreid.

“Julia for her strength. You see her compassion for people come through as a doctor, but she’s just willing to push the boundaries for a woman of that age. She’s strong, compassionate, very caring,” she said.

“All of the women are very strong. It’s still very hard to choose – every character brings something special.”

There are many reasons people appreciate Murdoch Mysteries, a show set at the beginning of the 20th century in Toronto that has a devoted, earnest and dedicated fan base.

“There’s so many different aspects of it,” Hooker said. “Of course there’s a mystery aspect and the historical aspect is very sharp, very funny.”

The show contains “little winks to future history,” she said.

“There’s a romance side to it – this ongoing romance between William and Julia. There’s a steampunk aspect to it, which is the technology of the time. It’s not one genre, it is so many different genres. So if you don’t like romance, you like the steampunk. If you’re not into the steampunk, you like the mystery.”

She also likes that the show is set in and filmed in Toronto.

“You’ll recognize places,” Hooker said. “What’s also really neat is that you’ll learn history, little bits of Toronto and Canadian history that you knew nothing about … the show will take some fun liberties, but they’ll also do some really accurate history as well.”

Hooker said she’s never taken to a show as much as she’s taken to this one. “I’m not a groupie. This is so not the type of thing I would normally do,” she said. “But I really got into the show big time in March or February of 2014, looked it up on Facebook and then there was this whole other Murdoch world.”

And through that Murdoch world – connecting online or on the telephone after a show – she’s developed some deep friendships, like with the women who are on the event planning committee with her.

“There’s the fan aspect for sure, where we go and we talk about the show, what’s going to happen on the next episode, what we liked, what didn’t we like,” she said. “And then it’s also just friendship, so we’ll talk about stuff completely unrelated to Murdoch.”

The group has grown since its inception, she said. There were about 100 people at The Old Spaghetti Factory on the Esplanade last month. In comparison, the first Meetup was about a dozen people at the Pickle Barrel.

Because the show is filmed in Toronto, Hooker and the rest of her Murdoch fan friends have been able to meet many of the cast and tour the set.

“All of the experiences are so neat. It’s so special and so wonderful and [the cast] is so friendly and warm. Shaftesbury (the show’s production company) is so supportive. It’s just so thrilling to meet the cast and then there are also these great friendships.”

One cast member she has met on several occasions is Arwen Humphreys, who plays one of her favourite characters, Margaret.

Humphreys grew up in the Beach and moved back in October, after living in Toronto’s West End for about four years.

“Every time I’d come back to the East End I’d take a big deep breath, because it’s just so nice and quiet,” she said, of her decision to move back. “This is the kind of area that restores my soul … I’m really happy to be back.”

Humphreys is one of several recurring characters with a connection to the Beach, including her TV husband, Thomas Craig.

“Tom lived [in the Beach] for a few seasons. He lived here and loved it here,” said Humphreys.

Craig was influential in expanding her character’s role, she said, noting he nudged producers to keep her as his wife after her initial appearance.

“I’ll always be so grateful to him because it was a big leap of faith for him to say, ‘I want you to do this,’” she said. “And also a huge leap of faith for the producers because I was completely untested. Nobody knew who I was.”

As the fans got to know her and her character, Margaret, it was clear to the producers and writers that the fans wanted more.

So they delivered, expanding Humphreys’ airtime in a way that rarely happens. Over the course of nine seasons, she’s played a grounded wife and mother, and has helped the opinionated character of Margaret come into her own as a woman of that time period, with story lines including the women’s suffrage movement and planning a wedding.

“It’s such a gift and I try to treat it as such,” she said. “It’s been a wonderful experience to be a part of her growth, and the work I’ve had to do as an actor to bring those qualities to her.”

While her and Margaret share some similarities – a big heart, big opinions – they are different in energy and appearance. So different that Humphreys says fans won’t recognize her on the street (she’s more likely to be recognized by her Beach neighbours while walking her dog, Hazel).

“I think when you play for a living you tend to be not as grounded as someone who has married. She’s married to quite a character – he’s a hard man, she’s married a hard man, and that in itself means that she has to be even more grounded to sort of keep him in line,” she said. “When you meet me, I’m not like that. I’m silly.”

Humphreys finds herself channelling her mother to get into character. The period clothing – she’s always wanted to be in a period show – helps, too.

“Why I’m able to play her the way she is, is because of the way we dress – I get straighter the more that I get the clothes on,” she said. “The whole thing is a thrill. To be a true Torontonian on a show that’s based in Toronto, and then on top of that getting to play ultimate dress up, it’s neat.”

She also loves the connection with the fans – and is grateful to them for helping the show blossom.

“The fans are the reason we’ve stayed on for so many years,” she said. “Season to season for a long time we didn’t know if it was going to keep going. Not only has the show grown, but the show has sort of gone backwards compared to most shows. Shows usually start big and then peter out, and we seem to just be growing season by season.”

Part of that is because the producers and writers are receptive to fans like Hooker and the rest of the Murdoch Mysteries Appreciation Society.

“What a validating experience … that you contribute to the show as much as the actors and the writers,” Humphreys said. “There’s a huge respect for our fan base with the producers and the writers, and I think it’s also because the fans really respect the show. I try to do every fan event that I can because I’m just so grateful.”

Ah it is a great show….I am a Texan, have lived many places, but that includes Toronto (Mississauga) for 3 of the best years of my life. I cannot get my Canadian friends to watch the show, but I do–and repeat the series when new aren’t added….except. Yes, the tiresome serial killer section. Made me skip episodes with this arc especially the excruciatingly bad episode on the train. NEVER THE LESS, thank goodness for Netflix or I would not get to see this exceptional series. Thank you for Toronto, for seeing how my grandmother and mother would have lived (and clothes and customs).

It really is rare that I find a TV show enjoyable enough that I want to give it my time and full attention. Murdoch Mysteries has to be one of the best thought out, best written and best acted TV series I’ve run across in a long, long time. (Thank you one and all for the hard work and attention to detail.) The core group of actors actually seem to enjoy one another’s presence…if they don’t, they’re even better actors than they seem. The ladies’ period costumes are really great and I’m certain take a lot of work. One issue I do question is where did these people go potty? Except at the nudist colony (a really unique and funny show) on the train and possibly a comment or 2 by Crabtree, there are no toilets (water closets) and/or outhouses ever shown. I can’t even imagine the issues involved for women of the day when they had the “urge” (that might even make an interesting show…gas explosion in an outhouse??) Thank goodness I found the first 7 seasons on Netflix. Otherwise I’d have to be satisfied to view only one show a week that airs in the Houston area around midnight on Sunday mornings, and they seem to be in random order. Those that I’ve turned-on to the shows on Netflix have really enjoyed the series, in fact a couple of them have become binge watchers on their days off. I admit to doing the same, but I’m retired so that’s acceptable behavior I suppose. It’s really is great to view the shows without commercial irritation. I think it would be…