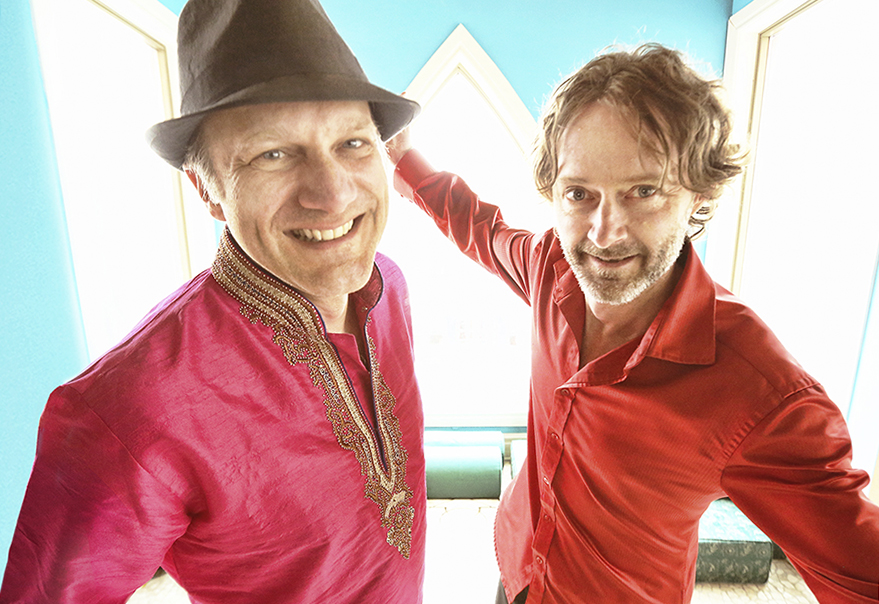 Violinist Chris McKhool, left, and three other violin and fiddle masters will perform at the Toronto Violin Summit on March 6. McKhool's Sultans of String bandmate, guitarist Kevin LaLiberté, right, will be one of the specials guests joining in at the performance.

The Toronto Violin Summit will celebrate strings as part of the Kingston Road Village Concert Series on Sunday, March 6.

Multiple genres and styles of playing will be heard at the concert, including jazz, Celtic and Norwegian Hardanger. Four of the city’s most talented and diverse players will perform with special guests.

Drew Jurecka plays jazz and classical, and has performed with legends such as Dave Brubeck and Stevie Wonder. Anne Lederman is a world-renowned traditional fiddler. Local resident Chris McKhool founded Sultans of String and is a well-known children’s performer, among many other roles, and plays music inspired by many cultures. Rebekah Wolkstein is a member of the Payadora Tango Ensemble, and while classically trained, also plays everything from folk to Klezmer to jazz.

“I am really looking forward to performing as part of the KRUC series again. It is such a fantastic space, and a wonderful audience to perform for,” says McKhool. “If this works out half as well as I think it will, we may have to take this on the road.”

Two prize packs, each consisting of a pair of tickets to the show and the latest Sultans of String CD, Subcontinental Drift, have been awarded to readers. Fans used the comments to answer the question: What is the difference between a fiddle and a violin?

Chris McKhool chose his favourite two answers. Congratulations to readers Neela Crigger and Dave Libbey, who will both be enjoying the show on Sunday.

Fiddle is another name for the bowed string musical instrument more often called a violin. It is also a colloquial term for the instrument used by players in all genres, including classical music. Fiddle playing, or fiddling, refers to various styles of music.

Both are equally beautiful in sound! Love them both! Fiddle I think is often used in faster classical pieces!

I have heard 2 different explanations for the difference between a fiddle and a violin. The first was when I was looking to purchase my first fiddle. I called a music store to find out if there was any difference between a violin and a fiddle. “most certainly!” came the response. “fiddlers have no front teeth”. My husband was getting dental implants at that time and had no front teeth so as soon as he got home I hauled him up to the music store so he could smile broadly and say he was there to purchase a fiddle. Unfortunately, the salesman I had spoken to had left for the day. What a disappointment! I’d have loved to have seen his face.

The second explanation which I love is that a violin sings but a fiddle dances and sings. How perfect is that?

You can take one of them to a pub!

At the most, it’s technique and setup. Fiddles are often adjusted for the differing techniques of a ‘folky’ style music. But they are just descriptive words that lead you to the music.

The difference between a violin and a fiddle is a tuxedo and $150 an hour. 🙂

The old adage is “You don’t spill beer on a violin!”