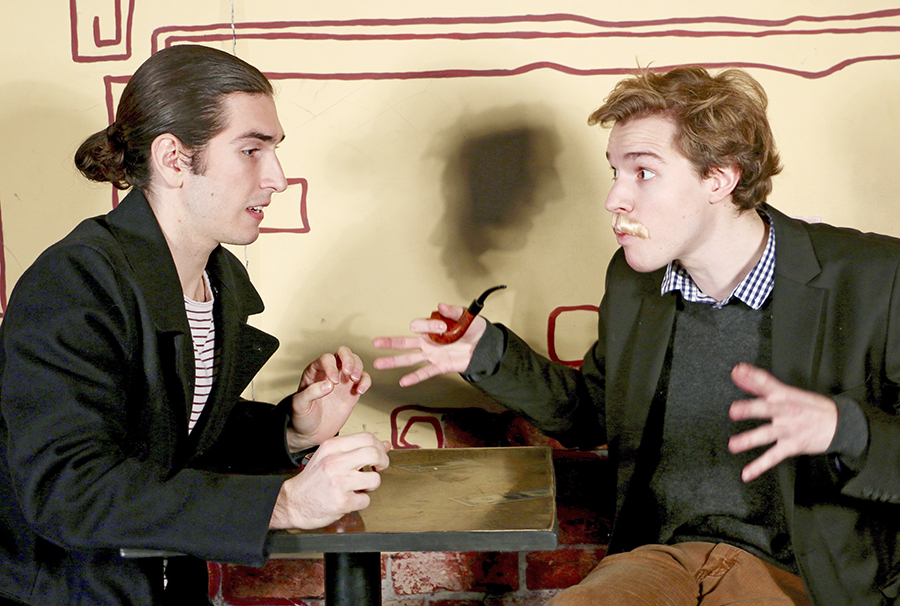 Picasso at the Lapin Agile features Dylan Evans, left, as Pablo Picasso, and Beach-raised Will King, right, as a young Albert Einstein.

Some faces familiar to anyone who’s enjoyed a Bard in the Park performance over the past decade can be seen in a new theatre company’s production of Noel Coward’s Blithe Spirit, with dates in February and March at Gerrard Art Space.

Melissa Beveridge, co-founder along with Keith Williams of Mortar and Pestle Productions, said starting a new theatre production company has taken much hard work and dedication, but has been worth the effort.

“It’s a new experience for me, but it’s very rewarding,” she said.

Working with old friends, most of whom have been involved with the Community Centre 55-affiliated Bard in the Park productions of Shakespeare, has been a definite plus, said Beveridge.

Not only does she know where their acting strengths lie, most Mortar and Pestle members also contribute beyond acting to the production: along with being actors, the co-founders and board members of the company include director, producer, artistic director, dramaturge, costume designer, seamstress, and graphic designer among their collective credits.

The art gallery venue is both a challenge and a blessing, according to Beveridge. While the small space means no complicated sets or set changes, it also means the staging becomes very important.

Another plus is that the cast can actually rehearse in the space where the play will be performed.

“It’s kind of exciting, because it’s a first for Gerrard Art Space and also for our company,” said Beveridge.

Blithe Spirit is a farce that tells the story of novelist Charles Condomine, his second wife Ruth, and a dinner party they host featuring spiritualist Madame Arcati. After a seance brings back Condomine’s first wife, the resulting jealous ghosts, misunderstandings and catastrophic blunders result in a fast-paced comedy full of laughs from start to finish.

Mortar and Pestle’s production of Blithe Spirit runs at 8 p.m. from Feb. 25 to 27 and on March 3 and 4, with 2 p.m. matinee performances on Feb. 27 and March 5. Tickets are $15 at the door or in advance from GAS. Reservations can be made by emailing mortarandpestleproductions@gmail.com.

Seven Siblings Theatre, founded by East End residents, presents Picasso at the Lapin Agile, on now until Feb. 28 at Round in Kensington Market.

Directed by Danforth resident Erika Downie, Picasso is a surreal comedy written by the legendary Steve Martin. The story features a meeting of Albert Einstein (played by Beach-raised actor Will King) and Pablo Picasso in the years just before each made their most renowned contributions to the science and art worlds. The two debate the meaning of the universe and art’s role in that meaning.

Jeanine Mackie and her band will be performing their fourth annual show at The Drake Underground since releasing their Live at the Drake CD in 2012.

Beacher Mark Eisenman’s trio will expand to four when special guest Warren Vaché joins them at the Jazz Bistro for three nights this weekend.

On Feb. 25, 26 and 27, Vaché will add his decades of experience on cornet, trumpet and flugelhorn to the trio’s solid rhythms. The trio is Eisenman along with Steve Wallace on bass and Terry Clarke on drums.

The inaugural Cold Weather Blues Fest will take place on Feb. 26 and 27, with 14 bands turning up the heat at 13 bars along Queen Street East and Kingston Road in the Beach.

With an aim of offering a break to those suffering from cabin fever, there are plenty of performances to choose from, with all scheduled to run from 8 to 11 p.m. both nights.

On Kingston Road, Alfie Smith will play Saturday at Green Dragon, while Mr. Rick’s Rukus Juice will be at The Grover both nights. On Queen Street, Big Rude Jake will be at the Balmy Beach Club on Saturday night. Breakwall will feature The Burgess Boys on Friday and Clint Ryan on Saturday. Castro’s will host Danny Kroha, while Julian Fauth will play Claret Wine Bar. Julian Taylor will play Saturday at The Gull and Firkin. Sugar Brown will perform at Hogtown Smoke, while Mike Daley and Terry Wilkins will be at Outrigger Friday. Saturday night will see Bad Luck Woman and Her Misfortunes at The Salty Dog. Paul Reddick will play Skwish starting at 9 p.m. Common Ground will be at St. Louis Bar and Grill, and Johnny Max will hold court at The Stone Lion.

Two nights billed as evenings of “song and word for solidarity” will take place on Friday and Saturday, Feb. 26 and 27.

The two nights are aimed at welcoming Syrian refugee families to the community, and will feature poetry, stories, and songs in an open mic format. Both evenings will feature poetry from Kate Marshall Flaherty and music from Anne Hurley and Jim Videto.

Beach Jazz and Reflection returns on Saturday, March 5, with the Jake Hiebert Trio.

Hiebert, well known under the name Big Rude Jake, has been a fixture on the Toronto music scene for two decades. His performances range through blues, jazz, rockabilly, gospel, folk, ragtime, punk, and more. For this performance, the trio will perform a program called Gospel Jazz: Down by the Riverside, digging deep into Hiebert’s love of music history.

Jazz and Reflection services run from 4:30 to 5:15 p.m. Admission is free, but a freewill offering is collected.

Acoustic Harvest presents Anne Walker on Saturday, March 5. Walker will be releasing her new CD Down the Horseshoe Valley Road.

The album is a collection of songs written about the area around Coulson, Ontario, where Walker was raised. Though she lives in Toronto, her perspective on rural life is grounded in her family’s five generations of history in the Coulson area.

For the show, Walker will be backed by Paul Mills on guitar and Shane Cook on fiddle, as well as her daughters Erica and Kate singing backup. There will be a multimedia element to the show, with vintage photos projected to complement the songs.