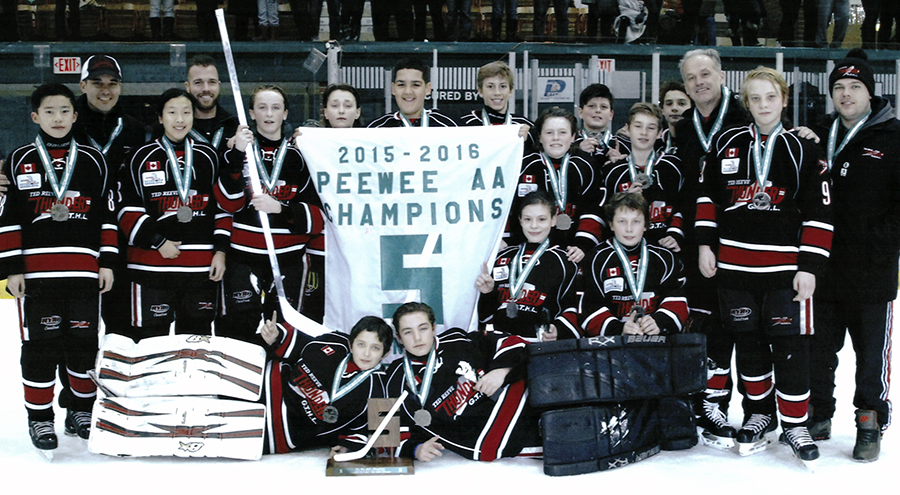 The team entered the International Silver Stick tournament Jan. 21 to 24 in Port Huron, Michigan, after qualifying at the regional tournament in Stratford in December, sitting number one in the province. Ted Reeve won the nail-biter of a final against the Mississauga Terriers 3-2 in OT.

“We’d won some big tournaments but nothing as big as the Silver Stick,” said coach Mike Saini, of the season thus far. “It’s incredible for these kids.”

As far as minor hockey goes, the annual Silver Stick is a big deal – 20 teams from Canada and the US face off to see who will emerge the best of the best. The finals give young teams their first taste of a big crowd and arena experience – teams emerge from a tunnel onto the ice and both national anthems are performed – and the competition is fierce. And it’s an even bigger deal for a team from a budding rink like Ted Reeve.

“When I first did tryouts, for tyke, we had eight kids show up,” he said. “We’ve been really trying to focus on being a fun place to play hockey, to be competitive but at the same time to really enjoy the sport.”

He said the team’s success in the Greater Toronto Hockey League has been mounting over the last several years, in part because the team is so close-knit.

“I think because we have a full complement on our team, where everyone contributes, that’s part of our success.”

But while the team spent the end of January celebrating their big tournament win, there is still work to be done – the regular season is followed by GTHL playoffs in a few weeks.

“We have multiple goals for this year and so far we’ve been achieving our goals, but there are still multiple goals out there for us to get so we have to stay focused and not get too ahead of ourselves,” Saini said.

“But at the same time, I said to the kids, ‘You guys did it. This is perhaps the most difficult tournament to win … and that is a huge accomplishment.’”