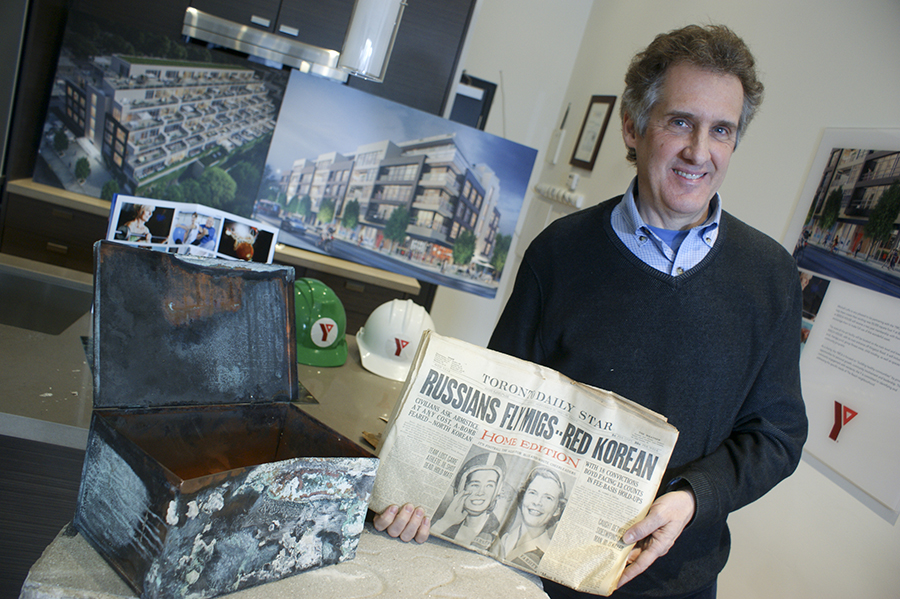 YMCA archivist Ian Fleming with elements discovered inside a time capsule buried in 1952.

“And 64 years later, we’re reading the paper,” said Alex Versluis, vice president of the YMCA for Greater Toronto to a room packed with reporters Jan. 26.

The new site of the Kingston Road YMCA was abuzz for the unveiling of the contents of a time capsule that had been buried in the cornerstone of the old YMCA since 1952 and recently discovered by builders on the site.

“We suspected there would be something, but we weren’t really sure,” said Versluis.

Encased in stone with “1952” engraved on top, a lumpy and tarnished copper box was opened to reveal four items: a newspaper, a silver dollar, a copy of The Book of Common Prayer Canada, and a program from the 1952 cornerstone ceremony.

It’s that last item that will give the YMCA the greatest glimpse into the opening of the East City YMCA 64 years ago – and maybe even connect the organization with some of the people involved in the planting of the time capsule. The East City YMCA was demolished late last year with the intention of building a bigger and better YMCA on the site, as the base of a condo building.

Virginia Dimoglou, general manager of the Kingston Road YMCA, said it is not unfathomable to think that some of the people involved in the 1952 time capsule might still be in the neighbourhood today.

“I’ve heard so many stories from people saying, ‘I came here when I was a teenager, played foosball in the ‘50s and ‘60s,’” said Dimoglou. “Other families who said ‘my children took nursery school here and now they’re adults …’ There are lots of people who have personal connections to this Y.”

The time capsule’s contents had some wear and tear — the bible was in rough shape. But at least the items were not water damaged – water damage is the greatest fear, said YMCA archivist Ian Fleming. “It can get pretty smelly,” he said. Back then, people did not pay as much attention as groups do now to packaging items in an air-tight manner.

In fact, time capsules are not buried nearly as often now as they were then, said Fleming. They are usually placed on display.

“Oh, this is more fun,” he said, gesturing to the scattered capsule contents and broken-up stone casing.

Fleming has been opening and examining time capsules for the YMCA since 2001 – it’s not uncommon for old YMCA buildings to have time capsules, considering the nature of the organization.

Nor were the four modest items in the time capsule out-of-the-ordinary. YMCA used to stand for Young Men’s Christian Association, hence the prayer book, and Fleming said money, particularly paper money, and newspapers were often included.

Fleming said the coolest thing he has found as the YMCA’s archivist is a letter from YMCA founder George Williams.

“In England, he founded the Y in 1844 and he wrote a letter to one of the Toronto chapters around 1880,” said Fleming. “Just to open it up and, ‘Oh my goodness, it’s from George Williams.’ It was written in beautiful handwriting and signed.”

The group has not decided where and how the contents will be displayed – the records have been donated to the City of Toronto archives, and it could be placed on display inside the new YMCA when it is completed.

One thing the YMCA is certain about — the planting of their own time capsule for future YMCA-ers to uncover.

Remember many good times at the Y. Started with swimming at MCI and day camp. The YMCA gave me my start at post graduate education at George Williams College in Chicago. I was grateful for all the Y did for me. many memories of working on the front desk on evenings and Sat.

I recall contributing to another time capsule at a nearby location in the early 1970s. When Balmy Beach School was rebuilt, Ward Nine News (now Beach Metro) was invited to contribute. I sent along our most recent copy and wrote a letter. Gil Darnley was principal then. Remember him?

Gil Darnley is my wife’s uncle. He is doing fine and currently living in Sunderland ON. It’s nice that you still remember him.

Neil, I saw this online and am not sure if this will still reach you. I see that Gill Darnley is your wife’s uncle. I was a student at John Ross Robertson 1966-1972 when he was principal there. I have lost touch with him since the mid 1990s. Is he still with us? Can he be reached? Would he want to be. There are a few of us from JRR that would love to re connect with him. I hope I can hear from you.