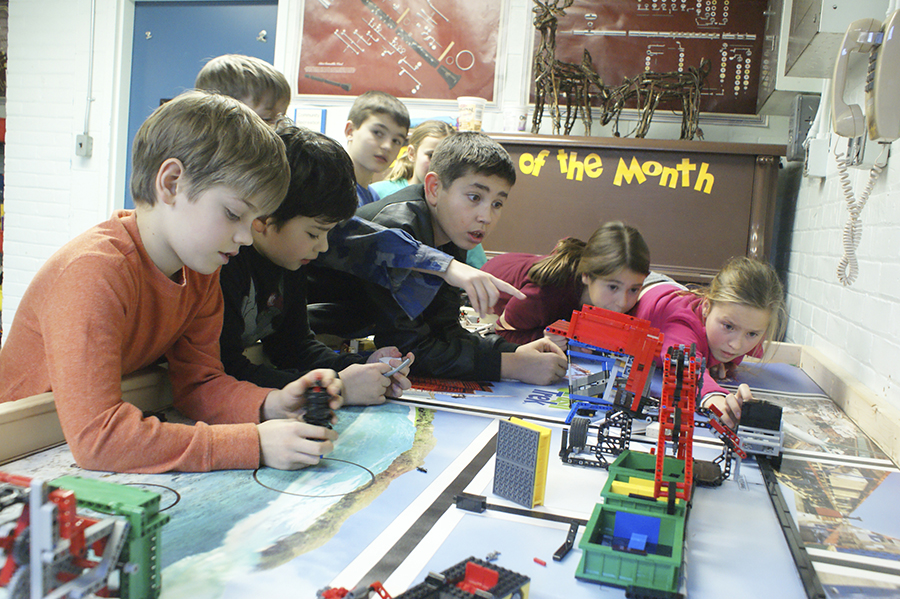 A number of the Beach’s brightest young minds represented the area at the First Lego League provincial championships Jan. 16, showcasing socially-minded projects and robotic prowess alongside hundreds of other students.

Glen Ames, Adam Beck, and two teams from Bowmore qualified for the competition that sees students aged nine to 14 compete in a series of robotics tests. Teams of 10 build and program Lego robots to perform various tasks for points, and also present a project that provides an innovative solution to a problem.

This year’s problem, trash, gave students an opportunity to find ways to clean up our world by presenting and implementing solutions that are already having an impact on a local level.

The Glen Ames Garment Grabbers decided to tackle the issue of textile waste, winning the “Gracious Professionalism” award at the competition with their creation of a sleeping bag for the homeless.

Meanwhile, the other three teams focused on the same issue, food waste, but approached it from different angles.

At Adam Beck, the team’s two-pronged approach to solving the problem of billions of dollars of food wasted each year stems from a focus on education. The team believes that if people knew more about the issue – and how paying attention to being a smart, less wasteful consumer would ultimately benefit their pocketbook – people would change their behaviour. And if more politicians knew about food waste, they could compel grocery stores to change their behaviour, too.

Many grocery stores throw out food that is fine to eat and could help those in need, said the team, noting there are a few programs in place, like Second Harvest, which combat the issue already.

They learned that France enacted a law last year stating that grocery stores must donate wasted food. The team would like to see Canada implement a similar law.

They also considered that customers could be trained away from their preference for perfect products and produce with an easy-to-use app. That led to the concept of iForage, an app that would notify the user when food was on sale (close to expiry).

This was the team’s first year entering the robotics competition, but the provincial judges saw the potential in that inexperience, presenting Adam Beck with the “Rising Star” award.

Before joining the team, only a handful of students had programmed robots before. But the majority play team sports, something they say was beneficial.

“We knew how to work as a team before we even joined the team, how to cooperate and come up with ideas together,” said Finn.

One of the pillars of robotics is the idea of “coopertition” – cooperating while also being competitive.

Adam Beck was awarded the Rising Star award at the competition.

Within minutes of meeting the Bowmore Bytes, it’s clear that not only are these Grade 7 and 8s passionate about learning and robotics, but they might be even more passionate about the friendships they have developed throughout the experience. The 10 people who make up the Bytes study different programs at Bowmore. Some are in the gifted program, others in core, others in French immersion. This means that before qualifying for the robotics team, the students had limited interaction with each other at school – crazy, considering how well the group gets along.

“A month or two ago we didn’t know each other,” says Dalia, incredulous, as others scroll through some 5,000 Google hangouts messages that have been sent between the group over the past months.

“What are we going to do after robotics?” Ben asks the group, wide-eyed.

Those blossoming friendships allowed for unique collaboration. For their project, the team got creative, writing and performing a skit about a boy named Johnny who nearly wastes a ham sandwich, but then learns better. Johnny is a metaphor for rich areas like North America, the team explains.

They also created a board game and tip sheet with simple ways people can combat food waste.

For many team members, it was their first try at First Lego League.

But it likely won’t be their last.

“I love it because everyone in the team has their own special talents and it’s amazing to see how well those go together,” said Dalia, a veteran member of the team. “There’s the project, the core values, and the robot game. Some of us are really good at the robot, some of us are really good with the project. It’s amazing to see what you get from these aspects coming together.”

Enter the senior lunchroom at Bowmore Public School and behold the impact of the Grade 6 robotics team: colourful signage pointing out bins for recycling, compost and garbage – signage and organization that wasn’t there before. The entire team competed in the First Lego League last year, giving them more experience than their older counterparts, the Bytes.

The Trash Busters kept their project solution hyper-local, noticing that their school didn’t have an easy-to-use sorting system for waste. So they got to work, marking garbage bins with “landfill” signs and bringing the recycling and compost bins out into the open.

They also created a website and online survey so their peers could educate themselves about waste, noting that over 200 people have taken the survey so far.

And their persistence is having an effect, with the team describing the scene at lunch a few weeks ago. One of their classmates was about to throw his banana peel in the garbage, and the class sang out in a chorus: “Don’t throw that in the trash! It goes in the compost.”

Moments like that make the hard work they’ve put in worth it, said team members, and reminds them that robotics is about more than just robots.

“When I first heard about robotics, I wanted to build a robot – there is nothing more fun than that,” said Gideon. “And then we learned about the project and that made it even more fun.”

Fantastic to see knowledge of food wasye and how to combat it at Adam Beck. Congrstulationd keep up the good work from Bolton Common Wralth Cafe part of the real junj food project England.