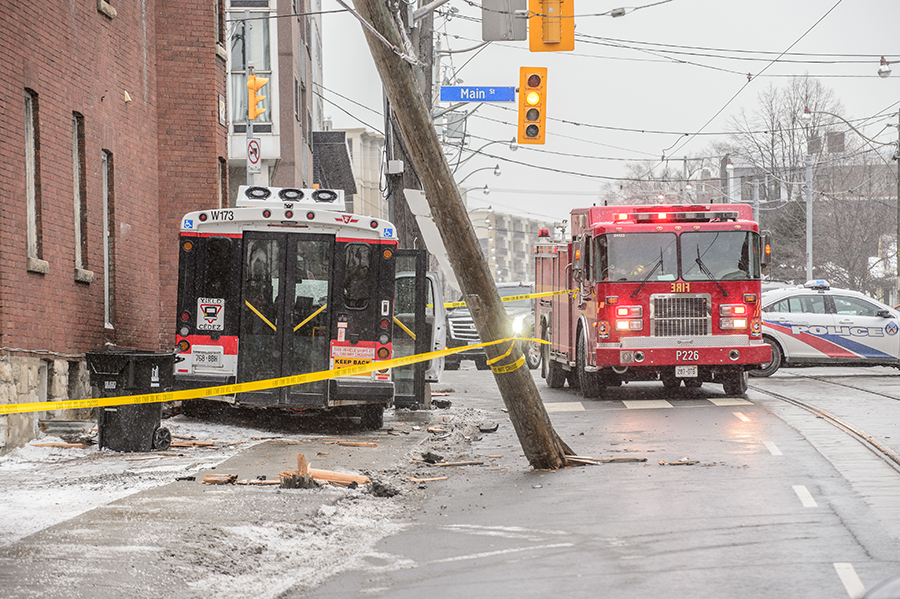 Kingston Road at Main Street was closed after a TTC Wheel-Trans bus struck a man walking his dogs, sheared off a hydro pole and then struck a building. The man, and his dog, were seriously injured, and the second dog succumb to its injuries. Photo: Victor Biro

A man, one of his dogs, and the driver of the Wheel-Trans bus that struck them while they were out for a walk around 8 a.m. this morning on Kingston Road at Main Street are expected to recover, Toronto police say.

The male pedestrian’s other dog, also with him when the bus hit, was declared dead at the scene.

“From the information I have the dog who died was 11-years-old,” said Stibbe.

The male pedestrian and driver were sent to hospital shortly after the eastbound bus struck a pedestrian and two dogs on the west side of the sidewalk.

The bus crashed into a hydro pole, shearing it off and exposing wires before becoming lodged between a building and second hydro pole on the north sidewalk.

“As for why that occurred, that’s still being looked at,” said Stibbe. “That’s something we’re trying to determine — whether it was a mechanical issue with the vehicle, medical issue with the driver or driver error, or some other factor.”

He said until police have a chance to review the video from inside the transit vehicle and investigate the incident further, it is difficult to point to a cause for the crash.

“We’re very fortunate, because of the cool temperatures, that there weren’t more people on the sidewalk and that it didn’t end up being a fatality,” said Stibbe.

Traffic in the area was diverted for most of the day with numerous road closures and transit delays as crews worked to clear the accident and investigate the crash.

Any witnesses to the accident are asked to contact police.

Update:502 Downtowner route is diverting both ways via Lee, Glenames, Southwood due to a collision at Kingston and Main. #TTC

Is there any update on the condition of the pedestrian who was injured? Or the second dog?