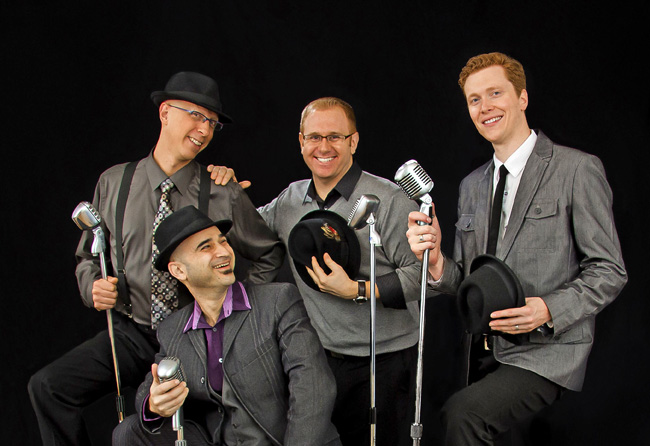 Cadence will perform a holiday show at Beach United Church on Friday, Dec. 18.

The a capella group, featuring two local residents, has travelled the world with nothing but microphones and vocal cords, entertaining audiences of all ages. Their energetic stage presence and singing prowess have made the group a hit from small venues to concert halls, but this show is a great chance to hear seasonal music by a group at its peak on its home turf.

Tickets for the Cadence Holiday Show are $20, or $10 for kids under 10, available through the church office, online or at the door. Beach United Church is at 140 Wineva Ave., just north of Queen Street East.

B2, the duo of Bill MacLean on vocals and Brian Stevens on piano, will perform a special holiday concert at Hope United Church on Saturday, Dec. 19. 12 Songs for Christmas: A Christmas Jazz Vespers! takes place at 7 p.m.

MacLean was the arts and entertainment writer at Beach Metro News for many years, but he has been part of Toronto’s folk and acoustic music scene for even longer. While he has performed and recorded acoustically under his own name, and plays bass with the Ian White Band, the inheritance of his mother’s Sinatra collection changed everything. B2 was formed around those classic songs and more.

Stevens is a pianist, composer, and musical director who has written, conducted and performed extensively across the country and beyond. With B2, he has performed across Toronto at jazz clubs and churches, including Beach United Church’s Jazz and Reflection series.

B2 will be joined for this concert by Michael Lalonde on bass, Karen Henderson on cello, and George Jardine on drums. The focus will be on Christmas and holiday songs, including two originals by Stevens.

Hope United Church is at 2550 Danforth Ave., at the corner of Main Street. Admission is a freewill offering.

Mark will play selections from his five CDs of acoustic guitar music, including Morpheus: The God of Dreams, his most recent. Battenberg is billing the concert as a performance of “eclectic, mystical music and verse.”

The Longest Night takes place at 8 p.m. on the night of the winter solstice, Monday, Dec. 21, starting at 8 p.m. Admission is by donation of non-perishable food.

Jazzy Sundays are from 2 to 5 p.m. on Sunday afternoons at Morgan’s on the Danforth, 1282 Danforth Ave. There is no cover charge.

Steve Koven and Henry Heilig will perform on Sunday, Dec. 20. On Sunday, Dec. 27, Lisa Particelli’s ‘Girl’s Night Out’ vocal jazz jam featuring Mark Kieswetter on piano will be on the stage.

Sibling puppetry team Puppetmongers are celebrating their 26th anniversary of winter performances with their twice Dora-nominated ode to Toronto’s past, Cinderella in Muddy York.

The show tells a humourous version of Toronto’s history, setting the famous Cinderella story in Upper Canada in 1834. Ella, forced to live with an English step-family in Muddy York, finds hope in an invitation to Government House, where she meets Princely Charming, the eligible son of the Lieutenant-Governor.

Staged with rod-marionettes and creative special effects, Cinderella offers a fun way for children (and their attendant adults) to get a taste of Toronto’s past. Children have a chance to meet the puppet characters and puppeteers after the performance as well.

Cinderella in Muddy York takes place daily at 2:30 p.m. from Dec. 26 to Jan. 1 at Tarragon Theatre Extraspace, 30 Bridgman Ave. The story is suitable for ages 5 to 105. Tickets start at $20, with group rates available. See puppetmongers.com for more information and links to tickets, or call the box office at 416-531-1827.