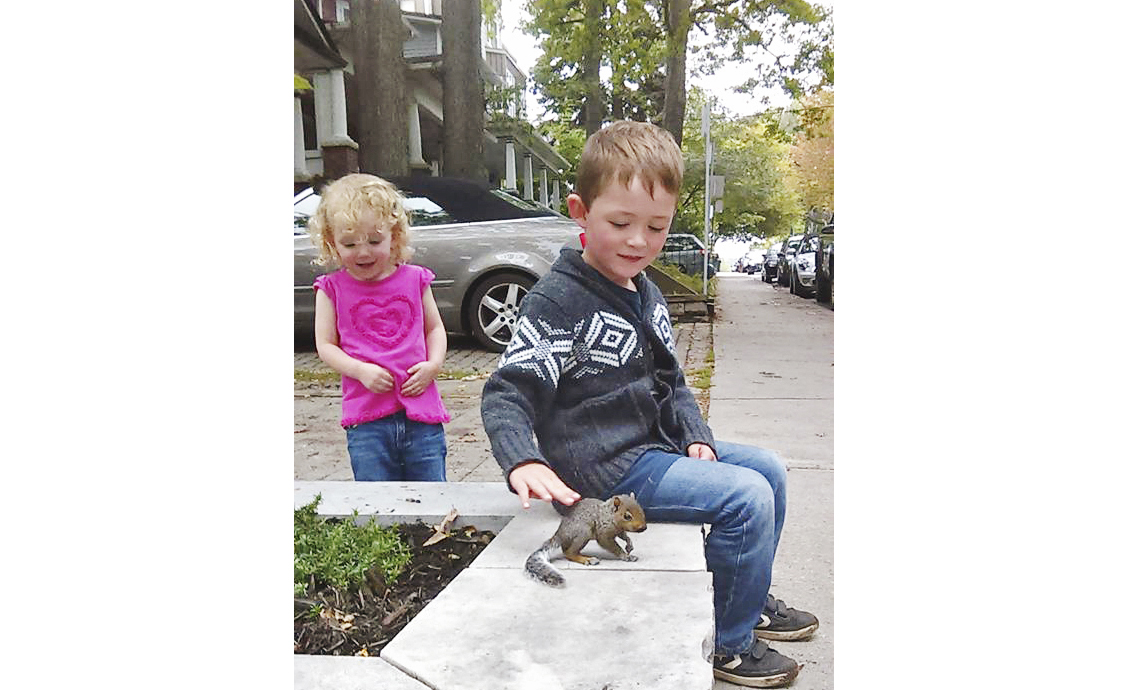 Katie, 3, and Ben, 6, play with a pair of baby squirrels on Lee Avenue on Oct. 1. The squirrels showed none of their usual skittishness around the children, behaviour Nathalie Karvonen, executive director of the Toronto Wildlife Centre, says is common among orphaned squirrels.
PHOTO: Submitted

Equipped with garden gloves and a tall yellow ladder, the rescue-and-release team from Toronto Wildlife Centre was in his backyard to install what may be the Beach’s first squirrel condo.

A five-unit, 0.6-metre “den box,” it came furnished with squirrel bedding and an entry designed to block raccoons’ grasping hands.

Perched a few metres up one of the backyard trees, it is home to five orphaned squirrels that were rescued in September by the Domagalas’ grandchildren and some of their friends on the street.

“Besides Gene Domagala, now we have other wildlife on Lee Avenue,” said his wife Patricia, laughing.

Sarrah Castillo, a member of the Wildlife Centre rescue team, said the den box will give the young squirrels a safe place to run until they figure out exactly where they want to be in the neighbourhood.

Until the big move last Monday, the wood box was kept inside a large enclosure at the Wildlife Centre.

Called a “soft release,” Castillo said that two-step transition is much easier on the animals than simply releasing them back outside.

And while Castillo normally cautions people not to feed wildlife, in this case, the squirrels were returned with a supply of nuts and seeds.

“It’s now getting into winter, and they don’t have the cache like every other squirrel does,” she said.

While the children did rescue two of the orphaned squirrels on Lee Avenue, it might be fairer to say the squirrels found them – the weeks-old animals ran straight up their arms.

“That’s a sign of being an orphan squirrel,” said Castillo. “They’re just so desperate that everything equals ‘mom.’”

Another sign is being covered in fleas. Nick Domagala, an older grandson of Gene and Patricia’s, said the baby squirrels were crawling with them until he got a chance to give them a bath.

A charity with a permit to rehabilitate and release wild animals, only the Toronto Wildlife Centre could offer to rescue the squirrels, said Gene.

Other animal services agencies all said they would have to euthanize the squirrels instead.

“They’re a lot of work to raise,” Castillo said, noting that they need to be fed milk quite frequently until they’re weaned.

Although the Domagalas only rescued two squirrels in September, when they offered to put up the den box in their backyard, it came with three bonus squirrels inside.

By mid-week, all five were already out exploring trees, fattening up for winter and avoiding the cats on Lee.

“Only in the Beach,” said Gene.