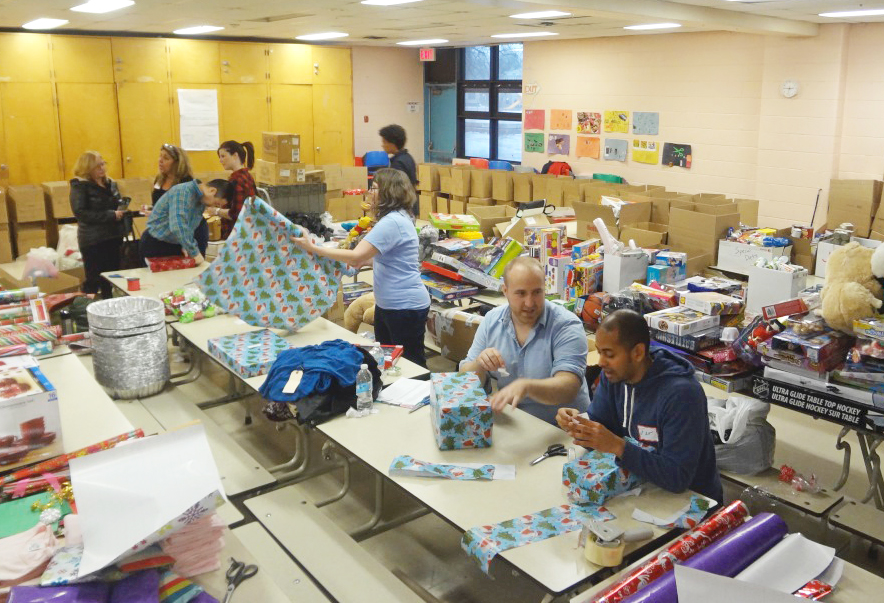 Lisa’s smile grows when she remembers how Neighbourhood Centre made her Christmas last year.

For over 30 years, volunteers at the community centre near Main Street and Danforth Avenue have bought, wrapped, and delivered free turkey dinners and Christmas gifts to families in need.

A single mother with a son and baby daughter, Lisa received one of the holiday hampers last year (She prefers to remain anonymous – ‘Lisa’ is a nickname).

The couple who donated it came to her door.

“I was so happy, and to get winter boots!” she said, talking about the snow boots that came for her growing son. “They don’t know the depth of how they’re affecting people’s lives, on a positive note.”

“At the beginning it looks crazy here – lots of boxes ready to go out, lots of volunteers,” said Karim.

But after many years’ experience, he said volunteers divide all the wrapping and deliveries into stages, which this year will run from Dec. 14 to delivery day on Dec. 18.

“People are so thankful, so delighted to receive the boxes,” said Karim, who does deliveries himself. “That’s a great feeling.”

Local families are nominated for the holiday hampers either by the principal at one of four elementary schools, or by the director of a local women’s shelter.

Families are then asked to submit a three-item Christmas wish list. Looking at last year’s wishes, Karim said they ranged from household items such as coffee makers and space heaters to children’s gifts that included toys, video games, cosmetics and winter boots. The centre budgets $450 for a family of four, $150 for a single person.

Two-thirds of the families on this year’s list are newcomers, and nearly half are single-parent households, like Lisa’s.

Karim can remember the look on Lisa’s face last Christmas, even though he wasn’t at her door when her gifts and Christmas dinner were delivered. That’s because as a regular helper with the Centre’s seniors’ breakfast and crafts programs, Lisa came in to thank her fellow volunteers.

Many of the seniors who join the centre’s breakfast program live in her Toronto Community Housing building, she said, and they often stop to say hello to her son, or offer her friendly pieces of wisdom.

“Whether I ask or not, they volunteer it,” she said, laughing.

Besides the staff and volunteers who run the centre’s many programs, Lisa said the participants themselves are a big reason why she is grateful to have Neighbourhood Centre close by.

“Everybody is important in making this work,” she said.

To donate, shop for a wish list, or volunteer for Neighbourhood Centre’s holiday hampers program, call Helena Frank at 416-698-1626 ext. 204 or email holidayhampers@neighourhoodcentre.org.