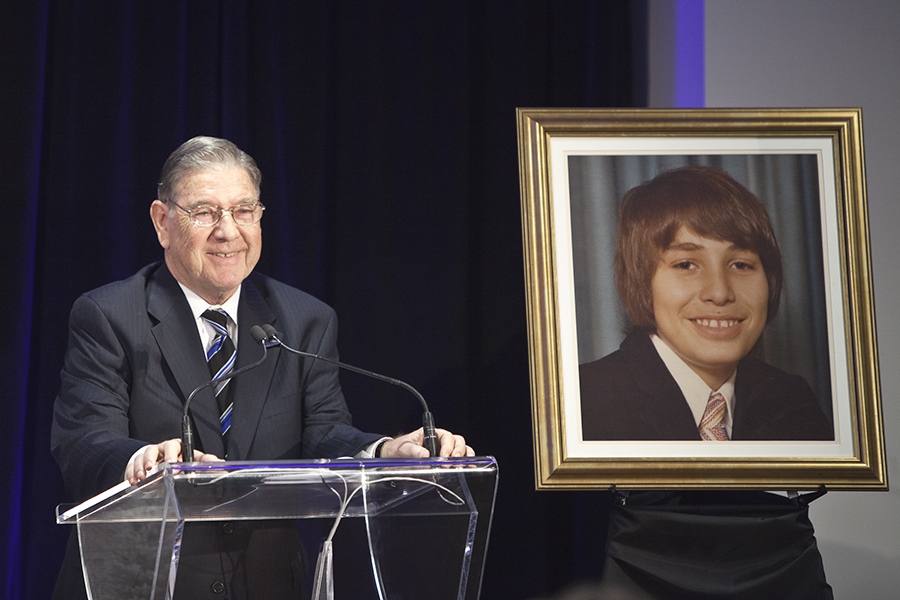 Myron Garron speaks beside a portrait of his late son, Michael, at the newly renamed Michael Garron Hospital on Dec. 2. Myron and his wife Berna donated $50 million to the hospital formerly known as Toronto East General, where their son Michael was born. Michael Garron later passed away from a rare form of soft tissue cancer at 13. The announcement marks the largest single donation to a community hospital in Canada.
PHOTO: Phil Lameira

Toronto East General Hospital has a new name – Michael Garron Hospital – and a $50 million donation thanks to philanthropists Berna and Myron Garron.

The largest single donation to a community hospital in Canada, it was made in memory of the Garrons’ eldest son Michael, who was born at Toronto East General in 1962, and who passed away from a rare soft tissue cancer at 13.

The donation will mean new equipment, the creation of the hospital’s first teaching and research chair positions, and new research into better clinical care.

Outside of its main campus at Coxwell and Mortimer Avenues, the hospital will be known as the Toronto East Health Network, reflecting its several partnerships with other healthcare providers in the city, as well as the clinics and outreach programs it runs off-site.

Speaking to the Garron family, the 200 people gathered in the hospital conference room, and all the staff watching from the hospital cafeteria, Sarah Downey, the hospital’s president and CEO, said today marks the anniversary of the day that Michael’s mother promised him he would not be forgotten.

“We will make you proud to have trusted us with your son’s name,” Downey said.

$50 million donation to a hospital.. This, I believe is to honour his son |Michael. Im sorry Myron, but I believe your donation has gone to waste. I will remember Michael Garron for a long time as the deceased son of a father who can afford to throw money around for recognition. You visited your son at the hospital everyday without doubt. I did the same for my mother and brother and father..or as best I could afford. You should have named a “Michael Garron grievance parking lot for those who can visit their dying loved ones without costing them a fortune… some can never visit. Makes more sense than a BLANK CHEQUE

What a bitter spiteful person Dave is. I for one am grateful to the Garrons for their generosity to our hospital.

Im with you. Dave is Mean & spiteful.
He sounds like hes bitter about being left out off an inheritance himself.

Sheila, Dave expresses legitimate resentment many feel when the names of familiar community places and public spaces are plastered with whatever the highest bidder wants. Is there a time line on new names? Will we be looking for another bidder with another name change attached to the next cheque a few years on?

We should all express grateful when a generous donation is gifted to us but strings attached to deep pockets are not about donations or gifts. They are about sealing a deal; making a sale and forcing the results upon the community. Please just state that the name ‘Toronto East General’ was sold in exchange for new equipment and wonderful new clinical services because that is what it is.

If people want to preserve the memory of a loved, one by all means donate in their name, and get a tax receipt like the millions of us who have known loss too and who were also born at what is formerly the Toronto East General Hospital. Some things should not be for sale.

Well, at least this sale of naming rights here is for a poor sick kid – what is irksome is when the name of some rich guy gets plastered over a building for donating a few measily million while the government picks up 90% of the tab.

Seymour Schulich’s name has to go on my resume because they named my business school after him. Andrew Carnegie built libraries and they are unofficially recognised as his but even he didn’t have the ego to put his name on every one.

What does annoy me is that the massive streamline moderne facade on Coxwell is going to be demolished – this is the symbol of the hospital and could have been converted to offices or something – if I was giving $50 million I would have made it a condition that they keep it!

I couldn’t disagree more. There is nothing worth saving in that facade on Coxwell. It’s junk. There’s no historic element to it. It’s ugly. It would hamper the efficiency of the hospital going forward. If that’s the symbol of the hospital then they should just mothball the whole thing! Knock it down!

The “half round” building at Bridgepoint was demolished and people only realised it was worth saving when it was too late to do anything about it.

The main building on Coxwell (from 1951) is the ONLY TEGH building with any architectural merit – it is a major landmark and a fine example of late Art Deco/Art Moderne design.

As an example that I am not the only one who appreciates it, go to http://forum.skyscraperpage.com/showthread.php?p=6535901 and see that it is included with a lot of other buildings of the same vintage and style. The photo there shows of the main entrance.

DAVE IS RIGHT… I WOULD NEVER DONATE MONEY TO ANY HOSPITAL !!!! ALL MONEY GOES TO DOCTORS PACKETS…DOCTORS,NURSES SUCKS…

I’m grateful that someone would give so much of their personal fortune to a hospital and at the same time, remind us all how difficult it is to lose someone close to us by renaming the hospital after their loved one so long ago. This money will help save lives.