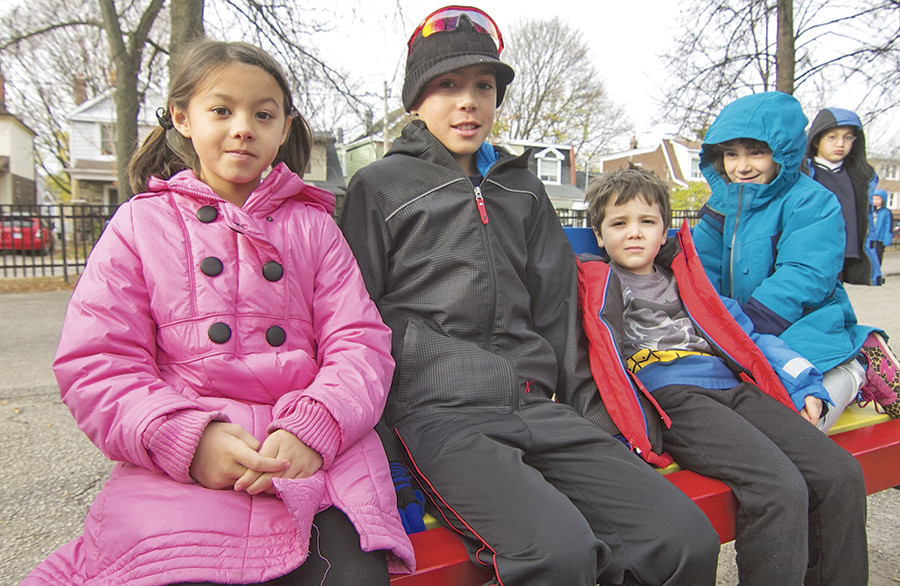 From left, Gwen, Evan, Henry and Claire show what the new 'buddy bench' by the Roden Public School and Equinox Altnerative School playground is all about – taking a seat beside someone who needs a friend.
PHOTO: Andrew Hudson

A bright new bench in the playground outside Roden and Equinox elementary schools has a simple use, but magical powers.

That’s what Mark Lasso, principal of Roden Public and Equinox Alternative, told a Nov. 17 assembly for the two schools, which share a single building near Gerrard Street East and Ashdale Avenue. At “magical powers,” Lasso had to pause and let some excited whispers clear the gym.

Painted bright red, yellow, and blue, Lasso said the new ‘buddy bench’ is also there for students who want to be a friend and make someone else’s day.

“This is one more thing we can use in the school to make a connection with somebody else.”

November was time to think about empathy in Toronto public schools, where students focus on a different character trait each month of the school year.

Philip Pace, a teacher at Equinox, said his Grade 2 and 3 students recently learned empathy by watching a dozen chicks hatch inside the classroom.

“We talked about how we can be respectful of this creature that was just born,” he said, adding that students were actually in class when the chicks cracked out of their shells, wet and featherless, with only an incubator to keep them warm.

Along with many other elementary schools in Canada, Roden and Equinox also take part in Roots of Empathy – a program where a volunteer parent makes several visits to a class with a new baby so students can see how he or she grows.

The idea is to have the baby act as a “tiny teacher.” Watching a parent respond to the baby’s emotions, students learn to recognize another person’s feelings, even a person who doesn’t speak.

Besides learning about the buddy bench, spelling “empathy,” and seeing emotional self-portraits made by senior kindergarteners, students at the assembly also got a quick lesson about the flip side of empathy – bullying.

Most hands in the gym went up when Lasso asked if students had ever had to talk with each other about bullying at lunch or recess.

But Lasso also spoke about what to do when bullying happens online.

“A mean word said online sometimes stays longer than a mean word said in person on the school yard,” he said, asking students to tell a trusted adult if they encounter cyber bullying or other threats online, before sharing some wisdom that social-media savvy adults can use just as well as children.

“When you can’t see a person, if you don’t show empathy, you’re more likely to do some things online that you know aren’t right,” he said.