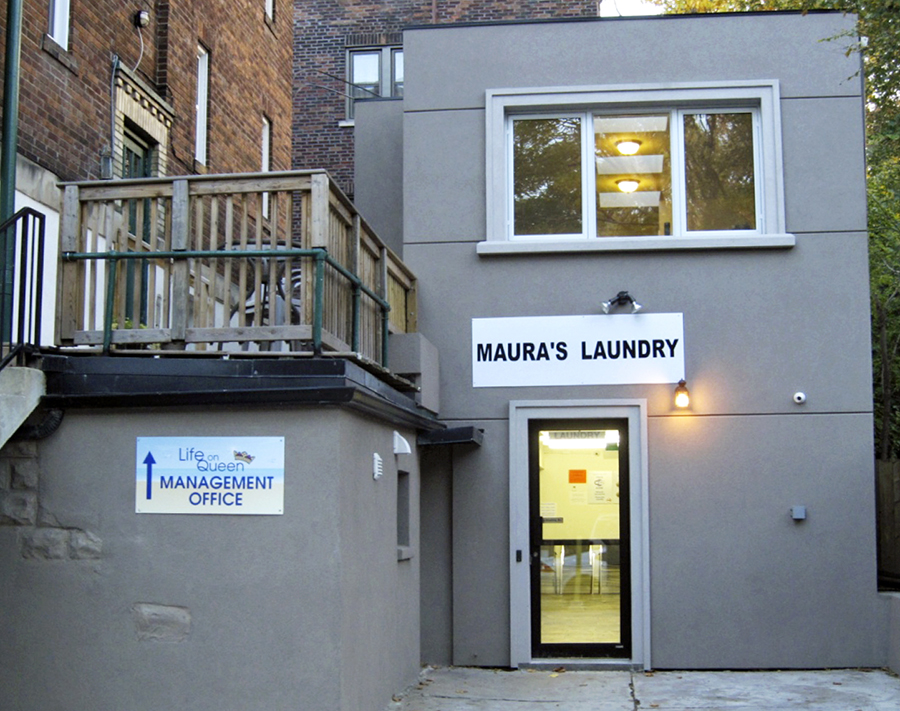 A sign reading 'Maura's Laundry' was posted above the former Squeeky Queen laundromat last fall after Maura Kilcoyne, a tenant in the attached apartment building alerted the city to the unlicensed laundry that was later shut down for violating a zoning bylaw.
PHOTO: Submitted

A landlord who owns 10 buildings on Queen Street East has been fined $3,000 for threatening and harassing a tenant.

Writing in an order issued Nov. 2 by the Landlord and Tenant Board, adjudicator Roger Rodrigues called the landlord’s actions “beyond the pale, troubling and completely outside the norms of acceptable behaviour.”

The board found that David Weiss, owner of Life on Queen/Westwood Holdings, started sending threatening emails and letters to a tenant at 2401 Queen St. after she objected to Squeeky Queen, a laundromat that Weiss opened illegally last fall on Willow Avenue.

Without a business licence and in violation of a zoning bylaw against retail shops on Willow, Squeeky Queen shut down in February.

Before it closed, Weiss posted a notice in all his Life on Queen buildings, home to about 250 people, asking for reports on whether the tenant, Maura Kilcoyne, had “approached or harassed” anyone about Squeeky Queen.

Weiss also had a large sign printed and hung above the entrance that read “Maura’s Laundry.”

Before Kilcoyne filed a harassment complaint at the Landlord and Tenant Board, Weiss tried to have the same board evict Kilcoyne for harassing him – a claim the board dismissed, noting that she had a legal right to oppose the laundry.

Weiss then asked the board to order Kilcoyne out of her apartment so he could rebuild it as a management office.

But the board refused, finding that at that point, Weiss was simply trying to scare Kilcoyne into moving.

In an emailed statement, Weiss said Life on Queen plans to appeal the Nov. 2 order, calling it a “default decision.”

“Unfortunately, it was based on the fact that no one from Management was present at that hearing, and as such, no one presented evidence to counter Maura Kilcoyne’s accusations,” he wrote. “We are going to appeal the board decision, present all of our evidence and set the record straight.”

In the decision, Rodrigues said the fact Life on Queen submitted no evidence and did not call Weiss as a witness at the Sept. 1 hearing was unexpected, unexplained, and counted against the landlord’s credibility.

“I’m pretty relieved,” she said. “This has been going on for a couple years now.”

Although she was the only Life on Queen tenant to speak at a city hearing into the laundromat, Kilcoyne and members of the Balmy Beach Residents Association gathered over 101 signatures from nearby residents who opposed it, too. But Kilcoyne felt singled out.

“There was a time between August and January last year when every night I came home wondering what was going to be under my door or in my mail from Weiss.”

While she welcomed the Landlord and Tenant Board’s decision as a fair one, Kilcoyne called the process gruelling – she missed five days of work for the various hearings concerning Life on Queen, where she represented herself.

Besides the $3,000 in fines, the board ordered Life on Queen to pay Kilcoyne $611 in costs, although that figure only covers part of the work she missed.

“It was never about me,” she said.

The point, she said, is that no landlord should be allowed to intimidate or harass their tenants.