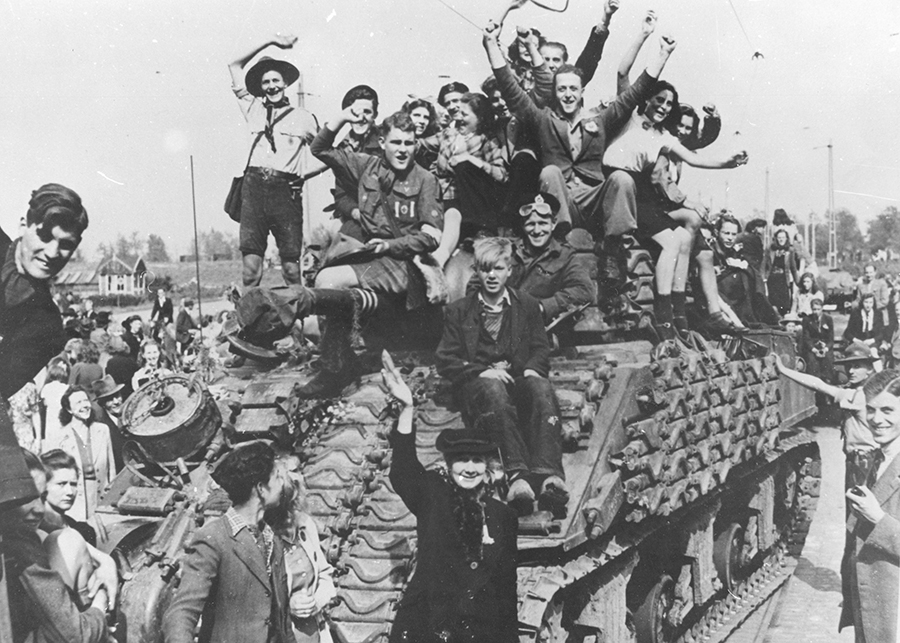 Re: Nine decades of life on Silver Birch (Nov. 3):

In fact, Bob Fraser might like to see the picture of my father Bill Houston, a tank driver in the Ontario Regiment, on Victory in Europe Day, which is in the Houston family photographs at innisfilhistorical.ca.

The photo shows my father smiling and cheering Dutch people climbing up on the tank. It was taken at Utrecht, Holland. My father told me the photo was on the front page of every newspaper in Europe to announce the end of the war.

In March 2014, public consultation meetings were held to discuss ideas on how to link the lake, boardwalk, Kew Gardens, and Queen Street East – perhaps some entrance or gateway to the park off the boardwalk, or from Queen Street East. The Beach BIA was concerned about the state of businesses on Queen; many stores were empty and there was a lack of customers.

The City of Toronto chose Plant Architects to design the project. One of the suggestions was to encourage more activities year round, including a low stage area along the Queen Street sidewalk (a stage created by paving part of the grass). Some residents feel changes to this area of the park are unnecessary. The grass area is considered part of a historic park, and should remain this way.

Other suggestions were back-to-back benches, and more garbage bins to keep the park clean. These were good ideas, but not at a cost of $490,000 (to be paid by three groups: Toronto’s Parks, Forestry and Recreation department, the Economic Development and Culture division, and the Beach BIA).

I have spoken with many residents who do not feel the redesigning of the park would entice more visitors to Queen Street shops, and felt the money could be better spent elsewhere. They suggested decorating empty store windows with art by local artists, and asked our councillor for another public meeting to discuss other improvement ideas. But this was never offered to the community.

Construction was to have started in 2015, but upon contacting Parks, I was told the start date is scheduled for the spring of 2016.

I agree with writer Bennett Guinn (Letters to the Editor, Nov. 3). Closed businesses are the result of landlords raising rents to astronomical levels, in addition to high taxes. I agree that the street looks shabby and unattractive.

But we must remain positive, and hopefully a miracle marketing expert will come forward with some new, exciting ideas for businesses on Queen Street East, besides the redesigning of a historic park.

As a long-time resident of the Beach who moved away for nine years and has recently returned, I can only echo Mr. Guinn’s observations.

Queen Street in the Beach is, to put it kindly, a dump. In addition to the many seemingly empty retail spaces – the former Shopper’s Drug Mart at Queen and Lee, the retail space at the bottom of the new complex at Queen and Woodbine, just to name a couple that stand out – all we seem to have are dumpy sports bars, chain restaurants and coffee shops, and nail bars.

I can only assume that it’s ridiculous, greedy rents being charged that drive all of the cool bars, trendy innovative restaurants and coffee places to Leslieville or up to Kingston Road. The Beach deserves better.

Re: The case for broadening Hydro One ownership (Oct. 6):

In his opinion piece, Beaches-East York MPP Arthur Potts misleads his constituents and fails to see the irony in his case for privatizing Hydro One.

Potts writes that his government has learned from the mistakes of the sale of Highway 407 by the Conservatives in 1999. Ironically, the sale of Hydro One looks and smells a lot like that sale. The government got a one-time lump sum to finance pre-election spending, and Ontarians have paid higher tolls in perpetuity as a result.

Selling our hydro system to private hands will no doubt lead to higher hydro prices for Ontarians. We will see more private forces enter into Ontario’s electricity sector looking to maximize their profits for shareholders, exerting even greater upward pressure on rates while service will decrease as operating costs will be cut.

He writes that the case for privatizing the public utility is to build $130 billion worth of infrastructure for the province, however the plan will net the province about $4 billion. What will it sell to raise the other $126 billion it needs for infrastructure?

Keeping Hydro One public and getting 100 per cent of the revenue would provide much more money for infrastructure in the long term.

Once the ownership becomes 60 per cent private, Ontarians are left with a privately-held monopoly with no incentives to do anything but maximize profits.

Let’s face the facts Mr. Potts: your government is turning Hydro One into a profit-seeking corporation, and using euphemisms like “broadening the ownership” does not change this essential fact.

I have to agree with both letters on Queen Street – it is sad to see so many stores vacant and so many buildings in need of some TLC.

The Kew Gardens project is supposed to revitalise Queen by bringing the people on the Boardwalk up to shop on Queen – but in order for that to work, people down by the Boardwalk would need to know it existed! And this is the problem, Kew Gardens does not have a decent entrance from the south end – there isa jumble of the snack bar, hockey rink and other things that mean that most people do not even know Kew Gardens exists or that there are walking paths going up to Queen at that point.

Queen also looks shabby because of the hydro poles and lack of decent streetscaping – it is a clutter of ugly concrete planters. Putting all this money from our taxes and from the BIA into one project that will only benefit a short stretch of Queen makes no sense.

The Queen street side of Kew could use some modest improvements such as double-sided benches and widening out the sidewalk, rather than a pretentious “belvedere” that will block views of the park and of the historic library.

Many people have complained to Councillor McMahon but she doesn’t listen to residents, though she is very keen on the BIA. Maybe if the members of the BIA would get the BIA to reverse its support and funding we could come up with a wiser use of precious funds.

I have to disagree with Mr. Romanuk’s comments, at least in part. Certainly there are areas of Queen that could be improved, and the neighbourhood has taken many strides over time, but to call it a dump, is silly. I would like to see more eclectic places, but perhaps you aren’t looking closely enough to see the great places that do exist. I can name 4 great stand alone coffee-shops. I can name 4 great restaurants (with plenty more passable). The bar scene is on the weaker end of things, but there are still some places. Sounds like serious hyperbole from our Vancouver friend. There is something to be said about the charm of the place, we don’t want glitzy storefronts, we want character.

Hi Chris, I really enjoyed hearing your opinion on Queen Street and its current infrastructure and development. Would you be willing to be interviewed for a story I’m writing on the Beaches community? I’m a Humber college journalism student. Thanks in advance for your reply.

Be careful what you as for. Wide side walks attract cyclist, FAST cyclists. Just look at the race track area. One needs a rear view mirror to walk along those side walks.

Public benches attract smokers.
A bench in front of a shop, for a consumer, is a different story.

Leslieville and Kingston Road are both great, but the crowds are still at the beach. We must be doing something right.