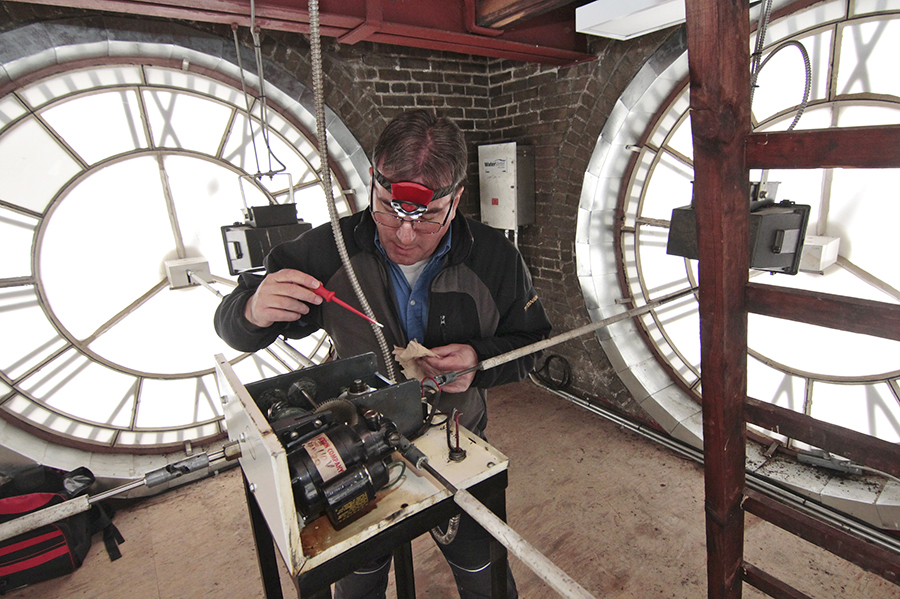 Horologist and tintinnabulator John Scott checks lubricating fluid levels in the movement for the clocks in the Kew Beach Fire Hall tower. Scott checked the clock while switching it off Daylight Savings Time on Oct. 31.
PHOTO: Andrew Hudson

On Halloween morning, John Scott flew across Toronto like an offbeat Santa Claus. But rather than slide down chimneys, Scott climbed up clock towers.

At each one, he left behind a gift that everyone wants, but no one can hold on to.

Scott is a horologist and tintinnabulator by trade, or someone who fixes clocks and their bells.

This Halloween was a busy day for him and his company, Scotiabell, which looks after public clocks across southern Ontario.

While Daylight Saving Time officially ended at 2 a.m. on Nov. 1 – an awkward time to “fall back,” chosen so bars can’t pour drinks for an extra hour – Scott had so many clocks to switch that he needed an early start.

So at exactly 11 a.m. on Oct. 31, Scott was waiting below the clock tower of the historic Kew Beach Fire Hall, for a reporter who was five minutes late.

Equipped with a short broom, a headlamp and a bag of tools, Scott entered the historic building at Queen and Woodbine and went into a small room by the firepole.

There, at the base of the tower, Scott has installed a small pilot clock to show whatever time is up top.

It also has a switch to make both clocks fly four times their normal speed, useful when Scott wants to “spring forward” in March.

“The neat thing is it’s all done with gearing,” he said, explaining how the high-speed mode relies on a reversing motor and a second set of gear teeth that only engage when spinning backwards. “The motor doesn’t turn any faster.”

Scott stopped the pilot clock. To anyone standing near Queen and Woodbine, time froze at 11:15.

Walking upstairs and through the firefighter’s third-floor workout room, Scott came to a door with a note about pigeons – a warning to keep the tower door and windows shut.

Built in 1905, a year after the Great Fire of Toronto destroyed a huge part of downtown, Kew Beach Fire Hall has always had a tower. But it only got a clock in 1912, after Beachers demanded one.

Back then, firefighters had to climb up the tower every week or so and rewind the clock by winching up a counterweight.

Today, that counterweight is gone, along with the clock’s pendulum. Both were replaced by an electric motor drive.

But firefighters still go in and out of the tower for its original purpose – hanging their 50-foot hoses to dry – so the pigeon warning stays put.

After climbing the tower stairs to the fourth-floor lookout, Scott pointed out a long wood box that used to hold the clock’s pendulum.

The box is covered in signatures left by generations of Kew firefighters. One glance spans the years 1928, 1945, and 2000.

Finally, Scott climbed up a metal ladder that dangles out of a trapdoor.

After some careful maneuvers, he stood in a square room with an eight-foot clock face on every wall.

The sunlight is diffuse, pouring in from all sides through panes of translucent white glass.

Each of the clock hands casts a shadow, so it seems like the four clock faces have flipped as well as stopped.

But on Scott’s smartphone, time was still ticking.

He got to work, pulling the cover off the central movement that turns the four rods leading to each clock.

He checked the level of the lubricating oil inside, which crawls up and over the gear teeth by capillary action, preventing wear.

The level was fine, and the gears looked okay – back in May, someone tripped the clock into high-speed by mistake, which wore out its second set of catches.

But the fluid had a funny colour, so Scott snapped a picture.

“With a public clock, you can’t take it back to the shop and study it,” he said, so he often relies on photos when something fails.

After checking the gearboxes behind Kew’s four clock faces, Scott swept the dusty floor and asked, “Have we been up here an hour yet?”

He checked his phone, which read 12:10, then peered out at the backwards-looking clocks – still 11:15. Five minutes to go.

After packing up and clambering down the tower, Scott had to briefly put the clock into high-speed mode to get the exact time.

There was a small hold-up on the way down. It wasn’t a technical problem, just a stop to look out the windows onto Queen Street and the Beach, as firefighters did even before Scott’s uncle founded his family’s time-keeping company, back in 1922.