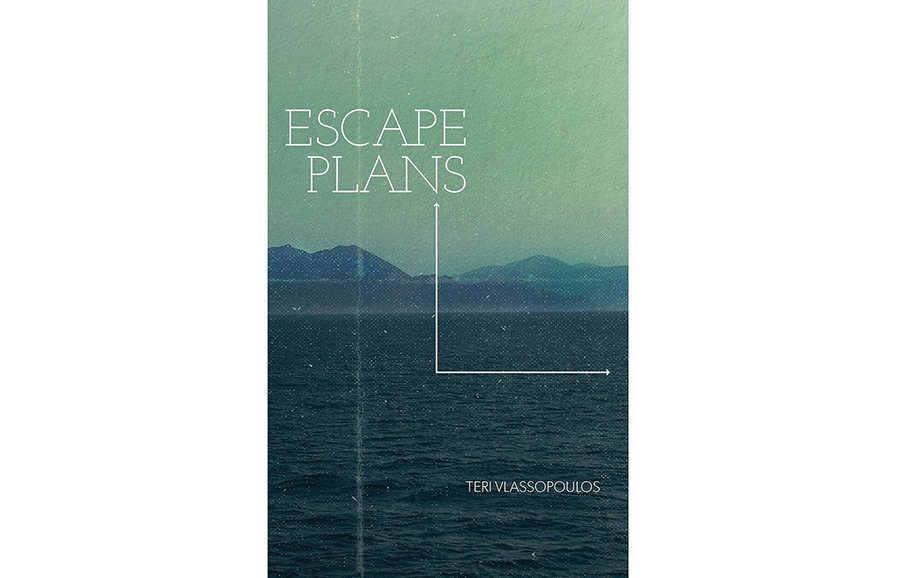 Escape Plans is the debut novel by author Teri Vlassopoulos, who lives in the Gerrard India Bazaar area.

Teri Vlassopoulos’ debut novel jumps around in time and location, from Toronto to Montreal, and from France to Greece, following the sometimes painfully separate lives of the Kiriakos family.

As major plot points go, Escape Plans gives away its ending – also the book’s beginning – as early as the first line: “My father drowned in the Aegean Sea, fifty nautical miles northeast of the port of Piraeus.”

So begins the tale told from the perspective of the first of three narrators, Zoe, the teenaged daughter of Niko and Anna.

She relays the story of learning her father has died with a sort of detachment, even after discovering her mother had known for half a day before telling her the news.

“Sometimes I wonder about those few hours, how it was possible that I could’ve lived through them without sensing any overarching and fundamental change,” Zoe observes.

The three main characters in Escape Plans are lovingly drawn, and Vlassopoulos does a fine job writing from three connected but very distinct points of view.

While Zoe struggles to find her place in the world, her father Niko tells his own story leading up to the novel’s defining incident. Niko, like his wife and daughter, seems a restless soul, not content with simply moving along through the mundanities of daily working and living.

“I’ve always been good at leaving” are the first words narrated by the family patriarch.

Turning his back on a safe career and, seemingly, on his family, Niko embarks on a new life and work path in Athens, though he soon finds it is not the city of his youth.

Meanwhile, wife and mother Anna also manages to avoid facing up to her own reality, while watching passively as her marriage appears to fall apart. As the book progresses, it becomes apparent that both Kiriakos parents have their own secrets and struggles to deal with.

Recurring references are made to the Graeae, a mythological trio of sisters who shared a single eye between them – a fitting metaphor for the Kiriakos clan, none of whom seem to be able to clearly see themselves, let alone the other members of the family.

While Escape Plans has its basis in tragedy, it’s not without humour and even, sometimes, optimism of a sort. As is often the case in modern fiction, the plot is almost a backdrop to the discovery of how and why things came to be as they are.

Escape Plans is a promising debut and hopefully the first of more to come. Ann Elizabeth Carson’s latest book Laundry Lines: A Memoir in Stories and Poems paints pictures of small-town Ontario life and a Toronto that exists mainly in memories. These little portraits of distinct moments in time offer the chance for insight and lessons learned by reflecting on both the events and attitudes of the past, as she looks back on her formative years.

Focusing frequently on the influential women in her life, Carson delivers a mix of historical atmosphere, life lessons, and the sadness of occasional family conflict. She doesn’t shy away from that conflict either, mentioning her aunts’ role in cutting her mother out of a visit to their dying brother, or airing her grandparents’ separation in a time when preachers’ wives normally wouldn’t have even considered leaving their husband, no matter how mistreated they might have been.

It’s not all conflict and betrayals, however. Carson evokes a strong sense of nostalgia looking back at fond memories of childhood time spent in the company of her aunts Damaris and Gertrude at their rural home in Cheltenham, northwest of Toronto.

Likewise, rationing during the Second World War is noticed only in hindsight, and Carson recalls meals shared with soldiers in training from the military base down the street.

Carson’s memories also reach to more recent times – as recent as the December 2013 ice storm that shut down much of the East End, though the storm served to bring the author’s family closer together in a spot of power during widespread blackouts.

A summer home on Manitoulin Island also gets the poetic treatment, the rural setting of Carson’s warm-weather writing retreat inspiring an ode to the days before modern technology.

As with Carson’s previous book, We All Become Stories, Laundry Lines puts strong emphasis on memories. Her role as a collector of stories in that book shifts to that of expert storyteller here, and Laundry Lines hits the right mix of mood, atmosphere and personal history.