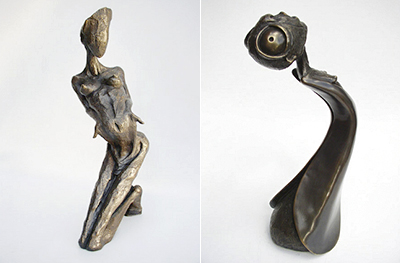 Christi Johnson, owner of the Great Spirit Gallery on Queen Street East, says the nine- and 12-inch sculptures are unique works by Toronto sculptor Julie Campagna and valued at over $1,900 each.

Johnson noticed the theft on the morning of Thursday, Nov. 5, and says the heavy sculptures were most likely stolen separately over the previous few days.

She suspects a woman who walked in and out of the gallery several times last week without saying hello.

“Unfortunately, they were bronze pieces, and bronze itself is quite valuable,” said Johnson.

“If she doesn’t turn around and sell them as sculptures, which I doubt she could do, then it’s possible she’s just selling them to a scrapper.”

Campagna is a well-known Toronto sculptor, and besides her own West End studio, Great Spirit is the only gallery in the city that sells her work.

“She is a sweet, humble woman, and certainly not deserving of this kind of theft,” said Johnson.

One of the stolen sculptures is a female figure called ‘Liquid,’ the other an insect-looking piece with an open eye called ‘Bugged.’

Since the theft, which police are now investigating, many local artists have promised Johnson to keep their own eyes peeled for the missing bronzes.

“People were hurt by this happening in their community,” she said.

“It was a really heartwarming response.”