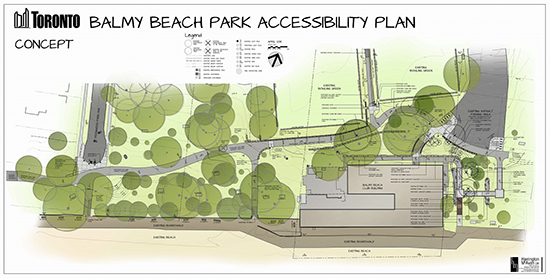 Parks staff unveiled the plans during an Oct. 21 open house at the Kew Williams Cottage.

The design includes a wider, paved and more level trail in front of the club entrance, and new wheelchair ramps on the east side.

James Dann, the city’s manager of waterfront parks, said the design aims to be both useful and attractive.

A small garden by the ramps may be planted as a butterfly habitat, he said, and two landings along the ramps will provide places to stop and look out over Lake Ontario.

The work will require removal of one maple and several poplar trees, but Dann said all the large oaks in the area will be preserved.

“It’s one of the things that people in the Beach hold near and dear,” he said, noting that the plan was reviewed by the city forestry staff.

Although the new ramps will not lead directly from the club parking lot to the boardwalk – negotiating the steep slope would require too many switchbacks – a small set of stairs will extend from one of the ramp landings directly to the beach.

Anyone with a wheelchair or other mobility device can get to the boardwalk by following the remodelled Martin Goodman Trail to its eastern end at Silver Birch Avenue and coming around.

No construction contract has been awarded yet, but Dann said it will have to be scheduled during warm weather because it requires some concrete work and thawed ground.

Given that it is on city land, Ontario law requires the entrance to the Balmy Beach Club to be wheelchair accessible.

Dann said there is another good reason to do it: demand.

“The beach is getting busier and busier,” he said, pointing to the growing crowds at Ashbridges Bay fireworks shows and an increasing number of community events along the eastern beaches in recent years.

To see the plan, visit toronto.ca.