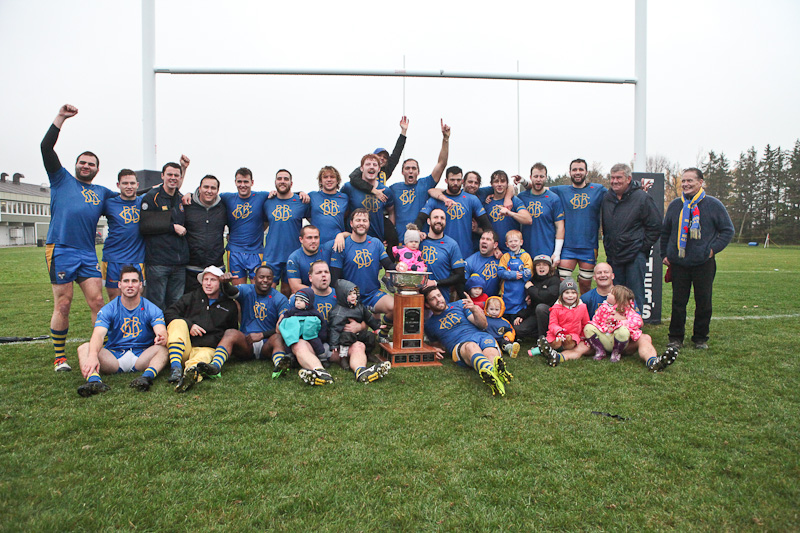 The intermittent downpours at Fletcher’s Fields in Markham could not put a damper on what was a hard-fought battle for the McCormick Cup, Ontario’s highest rugby reward, between Balmy Beach and the Toronto Scottish on Oct. 24.

The Sottish were first to put a mark on the scoreboard after a penalty-kick by Dan Gordon just five minutes into the match, which got their fans going in the stands.

Balmy Beach responded quickly, and two minutes later scored a try and conversion to go up 7-3.

A late first-half try gave the Scottish a light of hope and both teams hit the changerooms with Balmy Beach up 24-10.

The second half began with a steadier heavy rain, and ball control became an issue for the players. The Scottish started off by scoring a try early in the second, but that was as close as they would come to Balmy Beach, who scored a penalty-kick at the 61 minute mark to settle the score at 27-15.

This is the second consecutive McCormick Cup for the Balmy Beach Club’s firsts, who also won the league title three points ahead of the Toronto Scottish.

“It was a hard fought game and both teams played extremely well,” said Balmy Beach coach Bruce Gage at the end of the match. “Our defence was great and we managed to score some nice tries.”

Balmy Beach Club’s Chis Sopik knew it would come down to a final versus their greatest rival, but was confident they could win.

“We knew they were going to come back hard after the half, but if we could hold them we could take it home,” said Sopik.

Nearly a thousand fans, cheering both teams, endured the wet weather to watch the final match.

Stu MacSween made the trip up to cheer on the Balmy Beach team and was not disappointed.

“It was a fabulous game. The Scottish played really strong, but the Beach just kept coming on and on…it was fabulous,” said MacSween.

This was Balmy Beach’s second trophy win for the day. The club also won the Gee Gage Cup by defeating the Toronto Scottish 27-13.