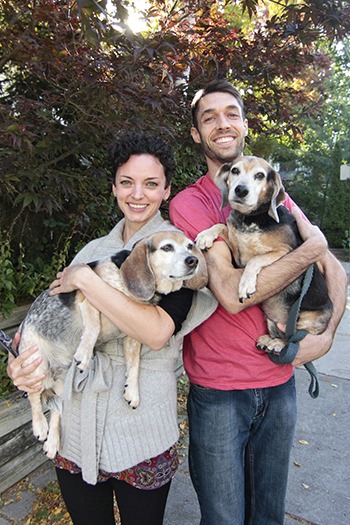 Thea Lilley and David Fair hold on to Abbey and Stella, their 11-year-old sister beagles, a few days after rescuing them from a dog-napper who stole them from outside a Queen Street grocery store. PHOTO: Andrew Hudson

A dog snatcher has his tail between his legs after a Beach couple foiled his plan to steal their beloved beagles.

“We’re never tying them up again,” says Thea Lilley, who left her beagles Abbey and Stella near a busy Queen Street East grocery store just after noon on Saturday, Oct. 3.

Home with a cold and a flu-stricken daughter, Lilley popped into the store for about 10 minutes to buy a few things for lunch.

When she came out, the dogs were gone.

“I started asking every single person walking past me, ‘Have you seen two beagles?’” she said.

On her fourth try, a woman told Lilley she had seen a man walking two beagles up Lee Avenue.

Grocery bags swinging, Lilley ran up Lee and met two couples who told her the same.

She ditched the groceries on a stranger’s lawn and ran faster.

When landscaper Salvadore Orbita heard Lilley call out about stolen dogs he immediately sprinted ahead – Orbita had said hello to the man a few minutes earlier, and noticed the odd way he looked to the ground and grunted.

Trailing behind and facing a steep hill, Lilley flagged down a passing car.

“I wasn’t sure that he’d let me in because I looked like a lunatic at that point,” she said, laughing.

She soon caught up with Orbita, who was speaking with a woman outside a Kingston Road apartment building. She had seen the dog snatcher go inside.

A friendly woman sat with Lilley and then Fair, who quickly drove over, as they waited for a police officer.

The officer eventually took Lilley’s statement and, acting on a tip, knocked on a few doors inside, but without any luck. There was no way to see the building’s security video until Monday.

Hitting a wall, Lilley and Fair switched to a new strategy – stakeout.

“I was prepared to sit there all night,” said Fair.

He drove Thea home and returned with a car full of snacks and drinking water.

Still on scene, the officer warned Fair not to confront the man if he saw him, but to keep him in view.

He brought Fair a tea and wished him luck.

Fair sat there, watching the exits and getting cold. The dogs would need to go out and pee at some point, but that might only take a minute or two. He was stuck.

Finally, a door opened. Abbey and then Stella waddled down the back steps.

Fair phoned police and walked toward the door. He saw that neither dog had a leash, nor was there any sign of the man.

Fair took a chance and called his dogs over.

Tails wagging, they chased Fair to the car and he scooped them inside.

The day after the rescue, Lilley and Fair’s phones lit up with Facebook messages – Lilley had posted a notice about the stolen dogs that got shared 362 times.

“I don’t even have that many friends on the site,” she said.

Many people wrote about times when their own dogs were stolen, or taken to a shelter by concerned passersby. One neighbour said no one should leave a dog where they wouldn’t leave a child.

Lilley said she and Fair are grateful to everyone who helped out, and especially to Orbita, who dropped everything to run and keep track of the dogs.

“It was amazing,” she said.

Update: Police say the Oct. 3 incident is still under investigation. Anyone with information can call 55 Division police at 416-808-5500.

I am so relieved to hear you got Abbey and Stella back! What a nightmare. Good work. I love running into them on their walks, I call them “the two smiling beagles” they are so sweet.
Leslie