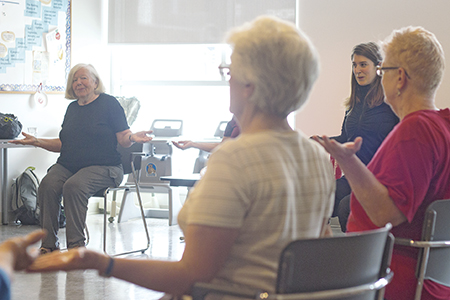 The Gentle Fit fitness class is one of many community-led, health promoting activities run at the East End Community Health Centre, which celebrates its 25th year this October 22.
PHOTO: Andrew Hudson

Walking into the East End Community Health Centre, the sun seems brighter on the inside.

Windows and light wells brighten a big, open reception area and an activity room that looks out onto Coxwell and Queen.

Even in the “clinical corridor,” where people meet nurses, doctors and many more health specialists, sunlight beams in.

It’s only a few blocks south, but it seems like a far cry from the little Coxwell clinic where it all started 25 years ago – a cramped spot that executive director Joyce Kalsen remembers best for the not-so healthy smell of french fries wafting in from next door.

But even as it has grown in scale, going from 1,189 clients in 1990 to nearly 7,000 today, the East End Community Health Centre remains true to its roots.

“We’re trying to reach people who tend to live in poverty,” said Kalsen, a former nursing director at Toronto East General Hospital who has led the centre since 1994.

Some clients face other barriers – language gaps, complex health needs, or a lack of health insurance – that are better handled by a community health centre than a fee-for-service clinic.

Besides doctors and nurses, the centre has physiotherapists, counsellors, dieticians, chiropodists and respiratory therapists – services that people would normally have to pay for out of pocket.

Asked how its East End area has changed in 25 years, Kalsen said, “For sure I’d say it’s gentrified.”

“But that’s made it more difficult for people who have less,” she added, whether they are house-rich, cash-poor seniors in the Beach, or recent immigrants living in a high-rise north of Danforth Avenue.

“What I would say is that we have pockets of hidden poverty.”

Stepping over to the fall events calendar hanging in the centre’s reception, Kalsen points to another thing that makes the East End CHC stand out.

From a breastfeeding support group to the Good Food Box, cooking workshops and movie nights to Building Better Backs, the centre buzzes with health-promoting activities.

“I think what we do differently is really focus on the whole person,” Kalsen said.

It’s the kind of place where a client might go to a nurse and come away with a prescription for a fitness class.

Zena Jones can attest to that.

Catching her breath after a round of Gentle Fit, Jones explained how the class is adapted for people with arthritis and other mobility issues, but it doesn’t mean they don’t break a sweat.

“It’s about us taking responsibility for our own health,” she said.

Standing in the hallway afterwards, Jones heard a friendly “beep beep” as Murray, a more seasoned Gentle Fitter, scooted by with his walker.

Dealing with complicated health issues and cancer treatments, Jones searched more than a year before she found the East End CHC, where she is now a volunteer board member as well as a client.

“It’s changed a lot of people’s lives,” she said, and not always in a straightforward way.

For example, the centre’s kitchen has great workshops – one for fall is Keeping Warm with Soups and Stews.

But they offer more than cooking know-how.

Because people go home with ready-made meals, Jones said, they often invite a friend over for dinner.

“It’s wonderful to see that,” she said.

Barb Hood is a nurse practitioner who has been on staff at the East End CHC for over a dozen years, and she’s not the only one.

“This has been the best job I’ve ever had,” said Hood, who has also taught at Sheridan College and worked summers in Nunavut and the Yukon.

Hood and other nurse practitioners at the East End CHC enjoy a full scope of practice, she said – something that community health centres started doing long before it caught on elsewhere in Ontario.

“You are really well supported by a collaborative team,” said Hood, who also works alongside physicians, clinical assistants and specialists such as a visiting psychiatrist and a consulting pharmacist.

“You can’t get away with very much in the lunchroom,” Hood joked. “It’s a healthy crowd that’s committed to health – they walk the talk.”

Like Hood, Kalsen said when she started at the centre 21 years ago, she was drawn by a healthcare model that focuses as much or more on prevention than cure.

“If we can help people look at improving their health and maintaining it, we could prevent them from coming into the hospital,” Kalsen said.

“I think you feel that you can make more of an impact on people’s lives.”

To celebrate its 25th anniversary, the East End Community Health Centre will host a party with sample workshops from 5:30 to 7:30 p.m. this Thursday, Oct. 22.

Congratulations! And thank you for your focus on health promotion and community health – it is crucial for a prosperous and vital community!

Congratulations, Joyce! East End CHC has been a tremendously helpful resource to the local community, whether it’s through Health Promotion activities, of Flu Vaccination Clinics, Clinical and Allied Services, or Community Advocacy! Thanks to you and your staff for all your dilligent and hard work to ensure quality of care and increased access to services in the East End!