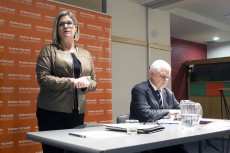 The provincial NDP are aiming to channel what they believe to be a strong current of public opposition to the government’s Hydro One privatization plan into a campaign that forces the Liberals to change course, while simultaneously reinvigorating the NDP. Nearly 75 East End residents – most apparent NDP supporters – turned out for a […]