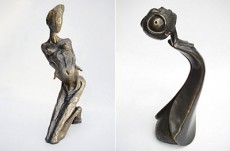 A thief stole two solid bronze sculptures from a Beach art gallery last week. Christi Johnson, owner of the Great Spirit Gallery on Queen Street East, says the nine- and 12-inch sculptures are unique works by Toronto sculptor Julie Campagna and valued at over $1,900 each. Johnson noticed the theft on the morning of Thursday, […]

Police are seeking the public’s help after a man broke into storage lockers in a condo near Danforth and Warden Avenues. Video from a security camera shows the suspect, who appears to be 25 to 30 years old, entering the condo in the early morning hours of Tuesday, May 5. Police say the burglar made […]

Police have named 33 year-old Alexander Herten-Greaven as 55 Division’s latest ‘Wanted Wednesday.’ Hearten-Greaven is wanted on charges of failing to comply with probation, break-and-enter, theft under $5,000, and assault with intent to resist arrest. He is described as 6’2” and 220 lbs with red hair and blue eyes. Anyone with information is asked to […]

Two men are wanted by police after a violent mugging near Danforth and Greenwood Avenues on March 17. Darrin Wickens, 29, and Taso Antipas, 45, both of Toronto, are wanted in connection with the attack, in which a man was stabbed and robbed. Police allege that the victim was assaulted by two other men, but […]

Former CBC radio host and Upper Beach resident Jian Ghomeshi turned himself into police after being charged with several counts of sexual assault. On Oct. 31, the Toronto Police Sex Crimes Unit began an investigation, resulting in charges being laid on Nov. 26. Ghomeshi, 47, faces four counts of sexual assault and one charge of […]

Thieves get a fair warning at Stephen Whittaker’s house – a red and white sign that tells anyone who sees it that a security camera is recording. But a thief missed or ignored that sign on August 21 when he parked his electric scooter, walked to Whittaker’s front step and stole a parcel, all in […]

Police are warning homeowners to watch out for the latest telephone scam. Callers claiming to represent the Municipal Property Assessment Corporation (MPAC) have been phoning homes fishing for personal information. MPAC recently sent out a reminder that the organization does not collect any personal information from homeowners, and advise anyone receiving such a call to […]

A 16-year-old youth reported that he was at Kingston Road and Glen Manor  on March 30 when he was  approached from behind by a male wearing a disguise who pushed him and took his cell phone, cash, knife and belt, then fled. A 38-year-old man was in his residence in the Gerrard and Greenwood area […]