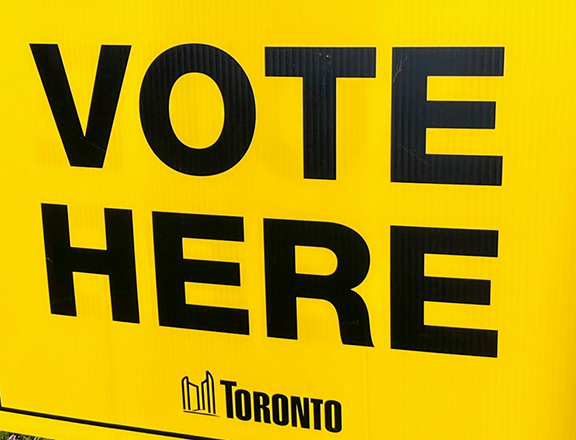 Byelections for school trustee positions for both the Conseil Scolaire Viamonde’s Ward 3 - Centre and for the Conseil scolaire catholique MonAvenir Ward 4 – Toronto Est will take place on Monday, Jan. 23.

Byelections for French language school trustee positions in central and east Toronto ridings for both the Catholic and public boards are set for Monday, Jan. 23.

The election of trustees for both the Conseil Scolaire Viamonde’s Ward 3 – Centre and for the Conseil scolaire catholique MonAvenir Ward 4 – Toronto Est were supposed to have taken place during the Oct. 24, 2022 municipal election.

During the municipal election campaign last October, many Conseil Scolaire Viamonde Ward 3 – Centre parents voiced disappointment at the lack of candidates running to represent their interests. They were further disappointed when one of the two candidates running was declared ineligible as they did not meet the criteria for French public school board candidates. That left only one candidate and the city declared the election void on Oct. 19.

Some Viamonde parents, such as Anna-Karyna Ruszkowski (who is now one of seven candidates seeking the trustee position) took it upon themselves to find out more information about the candidates prior to the October election date. She, and others, wrote letters to the City of Toronto’s Clerk’s Office requesting an investigation into the candidates.

This collective effort led to the discovery that Joseph Franca, a former candidate, did not meet the requirements to be appointed as trustee.

“I chose to run after I saw what took place so that something like that never happens again,” said Ruszkowski. “To avoid having people that are not francophone rights holders as candidates for a role that does require you to know the language.”

Although the previous round of elections saw only two residents register as candidates, it seems like the controversy sparked more interest because, to her surprise, she will be running against six others.

“It’s surprising but at the same time it is comforting to see that more people are becoming more aware of the needs of the francophone community and more people are willing to step up,” said Ruszkowski.

Other candidates running for the trustee position for Conseil Scolaire Viamonde Ward 3 – Centre in the Jan. 23 byelection are:

The Conseil scolaire catholique MonAvenir board also saw its election for trustee in Ward 4 – Toronto Est be declared void by the city.

In that situation, the election was declared void by the city only two days before it was supposed to have taken place. Originally in that race, there were three candidates running. One of the candidates was declared ineligible and another withdrew, leaving only one name on the ballot which meant the city had to void the vote for the position.

Running in Ward 4- Toronto Est to be the Conseil scolaire catholique MonAvenir trustee in the Jan. 23 byelection are:

None of those three candidates ran for the position in the October 2022 election campaign. The Conseil scolaire catholique MonAvenir Ward 4 – Toronto Est is made up of approximately 3,000 voters who support the province’s French Catholic school board.

For more information on the candidates and the Jan. 23 byelections, please visit the City of Toronto’s website at www.toronto.ca/city-government/elections/by-election/by-election-candidate-list