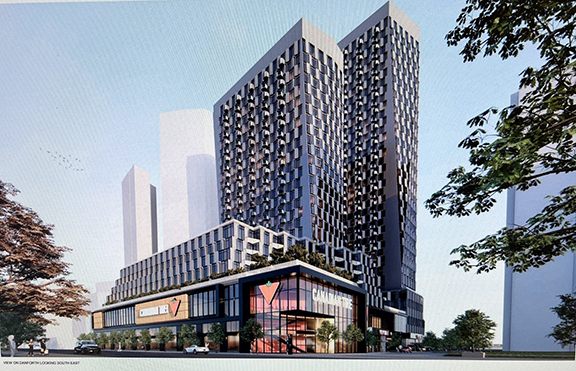 This image shows a proposed development for the Canadian Tire store site on the south side of Danforth Avenue east of Main Street.

As part of the continuing intensification of the Main Street and Danforth Avenue area, a proposal has now been submitted to the City of Toronto to redevelop the land on which the Canadian Tire store in the area is located.

The proposal, submitted by property owner Canadian Tire Real Estate Limited, calls for a 44-storey and a 33-storey residential buildings at the 2681 Danforth Ave. site which is just east of Main Street on the south side. The proposed ground floor retail at the site will be a new Canadian Tire store to replace the existing one.

While the proposal has now been made official, it has long been in the works with drawings of changes to the area as part of the Main Street Planning Study in existence going back more than three years.

There will also be a private driveway off Danforth Avenue into the development and dedicated park space estimated to be 10 per cent of the site’s total area. The park area is expected to be at the southern end of the site.

Also, the proposal includes a total of 907 bicycle parking spaces for the residential component, of which 815 will be long-term and 92 will be short term. In addition, there will be 24 long term and 38 short term bike parking spaces to service the retail component of the development.

The proposal for the Canadian Tire is just one of a number of developments slated for the area in the coming years.

The Main Street Planning Study was approved by Toronto Council in December of 2019 after years of consultation, and it approved numerous tall buildings and high densities in the area of Main Street and Danforth Avenue, mostly to the southeast of the intersection to take advantage of its close proximity to both a GO Train station (Danforth) and a TTC subway station (Main Street).

A number of big buildings are proposed for the area south of Danforth Avenue to the railway tracks, and east of Main Street and west of Dawes Road.

However, the Main Street Planning Study area included locations to the west of Main Street as well and also south and west to Gerrard Street East. Construction is already well underway on the 27-storey residential building on the west side of Main Street just south of Danforth Avenue and north of Stephenson Avenue.

Other proposals cited (but not necessarily approved yet) in the Main Street Planning Study include:

For more on the Main Street Planning Study, please see our earlier story at https://beachmetro.com/2020/01/22/main-street-planning-study-big-buildings-and-big-density-are-coming/