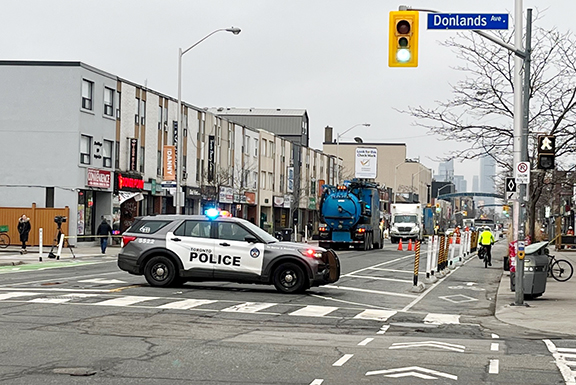 Toronto police have Danforth Avenue blocked off between Donlands and Jones avenues while crews deal with a gas leak in the area. Photo by Alan Shackleton.

Danforth Avenue between Donlands and Jones avenues is expected to be closed for most of today (Tuesday, Jan. 3) as crews work to contain a gas leak in the area.

In a tweet this morning, Toronto police said the section of road is expected to be closed to traffic in both directions for several more hours at least.

The gas leak was reported at approximately 7 p.m. on Monday, Jan. 2, and the road has been closed to traffic since that time.

There have been no reported injuries as a result of the gas leak.

Pedestrian and bike lane traffic is being allowed on Danforth Avenue between Jones and Donlands avenues, but not vehicles other than those belonging to the work crews.