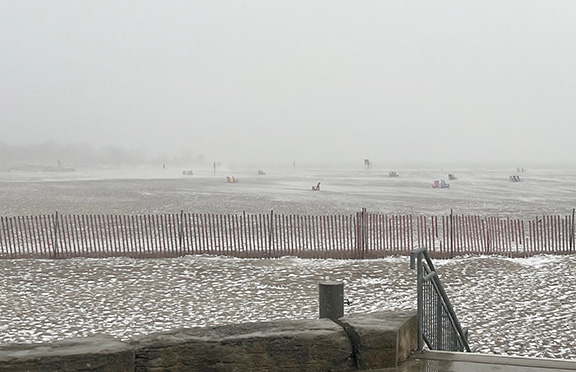 The winter storm moves in across Woodbine Beach earlier this morning. Photo by Alan Shackleton.

The wind starting picking up a little before 10 a.m. on Friday, Dec. 23, bringing with it the anticipated storm.

Toronto police are warning residents to use caution over the rest of today and tomorrow as the storm works it way through.

“The forecast for Friday, December 23 and Saturday, December 24, 2022, is anticipating blowing snow and flash freezing, resulting in icy and slippery surfaces, and reduced visibility,” police said in a news release this morning.

Police said residents should be monitoring conditions and evaluate their need to be on the roads during this time period.

The City of Toronto also released a tweet advising residents that crews are doing their best to deal with the storm as it moves in, but caution is advisable as conditions are becoming very slippery for walkers, cyclists and drivers.

“Toronto road conditions aren’t ideal right now. We’re doing our best to keep roads safe but roads and walkways may become icy and slippery so please, be careful and stay back from and do not pass salt trucks and road crews,” said the city’s tweet. “Let them do their work safely and efficiently.”

Toronto Hydro also said it is on alert to deal with power outages due to the high winds, snow and falling trees and branches.

The storm is expected to decrease in intensity by tomorrow (Dec. 24) morning, according to most forecasts.