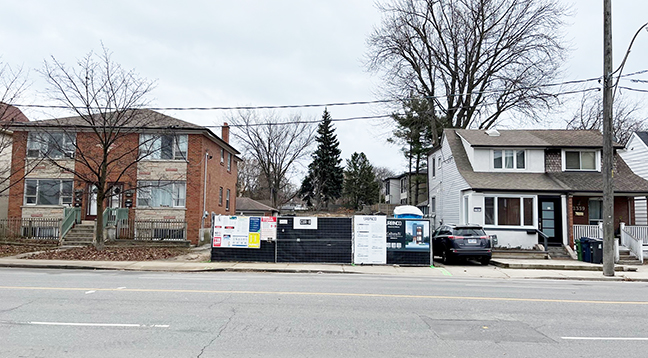 A building site on Gerrard Street East will see increased density with a multi-unit building planned for the location. Photo by Alan Shackleton.

With the approval this month of the 2023 Housing Action Plan for Toronto, the process of updating the city’s planning rules and regulations to meet the target of creating 285,000 housing units over the next 10 years begins.

Toronto City Council approved the plan at its Dec. 14 meeting. Councillors voted overwhelmingly in favour of the motion put forward by Mayor John Tory and Beaches-East York Councillor Brad Bradford, the Chair of the Planning and Housing Committee.

“The 2023 Housing Action Plan will allow us to bring in more housing and more affordability faster, by thoughtfully removing red tape and speeding up approval times,” said Bradford in a news release after the plan was approved.

“We need to take bold actions to encourage the future prosperity of our city and make sure that everyone has access to housing.”

In the news release, Tory also praised the plan and the impact it will have.

“This new Housing Action Plan sets aggressive targets to get more housing built with lightning speed,” said Tory. “With Council’s support this week, we’ve taken a major step forward to ensuring that every Toronto resident has a place to call home. We are working together to tackle this housing crisis and ensure that our city is a welcoming place for everyone.”

The Housing Action Plan also re-introduced a motion to legalize rooming houses across all of the city  – a motion that had been deferred on two previous attempts.

Although rooming houses were already legal in what had been the old city of Toronto prior to megacity amalgamation, approval of this bylaw will now permit tenants to legally rent single rooms in neighbourhoods where it is currently prohibited such as Scarborough and North York.

Some have speculated that the re-introduction of this motion was Toronto Council’s first test and opportunity for Tory to utilize his strong mayor powers if it was once again rejected. However, Toronto-Danforth Councillor Paula Fletcher deemed that interpretation as “ridiculous” given the fact that the composition of Toronto Council that was elected in October of this year has changed since the last attempt to pass the rooming houses bylaw.

“People that were elected were very open to legalization and licensing of rooming houses across the city,” said Fletcher. “It’s got nothing to do with the strong mayor powers of any kind.”

The Housing Action Plan was received positively by current council members as they voted 23-3 in its favour. The bylaw to legalize rooming houses, which Fletcher and Bradford voted in favour of, was also approved by a majority vote of 18-8.

“The largest number of fires and deaths by fire (in residential areas) has been in illegal rooming houses throughout Scarborough and North York,” said Fletcher. “Something had to be done to stop people from dying from fires.”

Council’s approval means that from March 31, 2024, rooming houses in Toronto will be capped at six, 12 or 25 dwelling rooms depending on the zone.

Between now and when the new laws will be implemented, city officials say they will work on transitioning rooming house landlords who are currently operating illegally into doing so legally.

There are currently 350 legal rooming houses in the former city of Toronto, parts of York and Etobicoke. Officials say they know of at least 80 “problem properties” or illegal rooming houses they are currently working with to bring into compliance. However, it is acknowledged that the actual number of illegal multi-tenant homes is a difficult figure to calculate and is probably much higher than thought.

“I think every neighbourhood knows where these illegal rooming houses are,” said Fletcher. “Neighbours know and neighbours will tell.”

City officials plan on outreach over the next year’s preparation for the changes in order to identify these houses and collaborate with landlords to bring them into compliance. Landlords can expect incentives such as grants and fee waivers to assist them in a smooth transition towards compliance with the new legislation.

According to city officials, in the case where a landlord doesn’t comply, they will be mandated to pay an unspecified fine. Toronto plans on working with the provincial arm of legislation on a recourse for such situations, but they emphasize that the goal is “not to de-house” existing tenants and that the enforcement objective is to bring people into compliance safely.

Toronto’s City Manager has until March 2023 to report to the Executive Committee on the 2023 Housing Action Plan with specific details such as timelines, measurable targets, and specific units created.