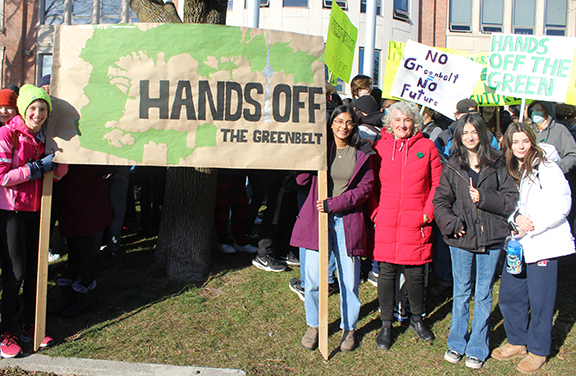 Students at Riverdale Collegiate Institute held a walkout on the afternoon of Wednesday, Dec. 21, to protest plans by the Ontario government to allow development on Greenbelt lands in and around the City of Toronto.

“Conservation is critical to our future,” said Grade 10 student Ahnaf Al Habib at the protest which was attended by a large crowd of students holding signs and chanting in front of the school on Gerrard Street East by Jones Avenue.

Habib was one of the organizers of the student walkout and protest.

Ontario’s Greenbelt, which is an environmentally protected zone around and in the Greater Toronto Area including wetlands and farm land, is under threat of development due to the passing of the provincial government’s Bill 23, the More Homes Built Faster Act.

The bill opens up large areas of the Greenbelt that had previously been deemed as protected lands for developers to now build housing on. It was passed into law by the Progressive Conservative government of Premier Doug Ford on Nov. 28 despite protests about its environmental impact and concerns about the connections between the owners of some of the land being opened for development and the government.

She said Bill 23 should be called the Pave Over The Greenbelt Act, and that it does nothing to increase the amount of affordable housing in the province.

Fletcher said there is available space, and the desire to build more and higher buildings in Toronto, that could better address Ontario’s housing crisis than housing developments on the Greenbelt.

“Build here, not there,” she said.

Fletcher also reminded students that the nearby Don River was a part of the Greenbelt and it would be severely impacted by some of the proposed developments now being allowed under Bill 23.

Also, Fletcher said other parts of Bill 23 eliminate the park space dedications and money that the City of Toronto used to receive from developers.

“Doug Ford’s bill is taking greenspace away from you and is hurting your future,” she said.

Toronto-Danforth MP Julie Dabrusin also attended the protest and spoke to the students.

“Make sure the province hears your voice,” she said.

“It’s important to know that this is not a choice between developing the Greenbelt and affordable housing. We can do both. You don’t need to pave the Greenbelt to do that.”

The protest by the students drew the attention of passersby and drivers along Gerrard Street East, many of them honking their horns in support.