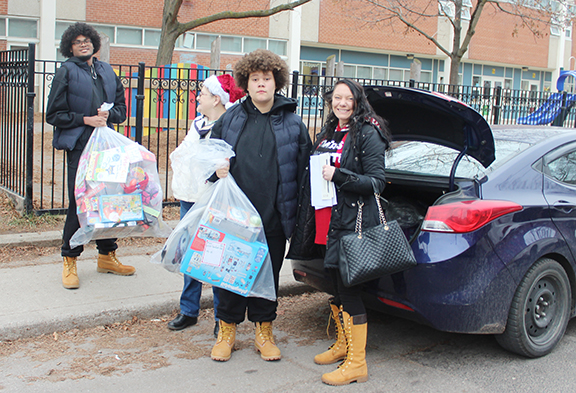 Wilkinson family members Xavier, Catherine, R.J., and Rebecca load up their car as they prepare to deliver toy donations to families in need today as part of the Community Centre 55 Share A Christmas Program. Inset photo, Dave and Michael Addison prepare to make their deliveries of donated toys. Photos by Alan Shackleton.

Volunteers were out in force today to help deliver holiday cheer as part of the Community Centre 55 Share A Christmas Program.

In its 41st year, the program is helping close to 1,000 families in need in the East Toronto area during this holiday season.

Toys and grocery store gift cards were being delivered to the families and individuals (depending on their needs) during the day on Wednesday, Dec. 20.

For many of the volunteers gathering at Community Centre 55 this morning, helping out with Share A Christmas is a family tradition.

There were three generations of the Wilkinson family collecting the bags of toys that they would be delivering in the community.

“There’s a lot of joy and happiness in people’s faces when we come around, and we’re so happy to be able to bring some Christmas cheer,” said Rebecca Wilkinson.

Also helping with the Wilkinson family deliveries were sons Xavier and R.J., and grandmother Catherine who is a former board member of Community Centre 55.

Also volunteering today were Dave Addison and his son Michael.

“We’ve been doing this for 18 years,” said Dave as he loaded up the car on Swanwick Avenue which had been closed to through traffic by police so the volunteers could safely collect their donations. He admitted that delivering toys and grocery store gift cards was a bit easier than delivering hampers full of food, including turkeys or hams, that had been done in the years prior to COVID-19.

Dave said the reactions of the families can be quite emotional when the volunteers come by to deliver.

“I remember one family just broke out in tears because this was their entire Christmas. They were in tears and hugging us, and that even got me crying. They were three generations of one family living in a one-bedroom apartment so it was really important to them.”

Community Centre 55 Executive Director Reza Khoshdel said on Wednesday morning that need in the East Toronto area (and across the city) is increasing as people are facing more and more challenges when it come to food and housing affordability.

“The demand has really increased this year,” he said.

Khoshdel said Share A Christmas simply could not happen without the tremendous support it receives from local residents, both through their volunteer efforts and their monetary and toy donations.

“We’ve had an incredible amount of support from the community and are so appreciative. A lot of generous people have helped us keep up with the demand,” he said.

For Khoshdel, who started his job as Executive Director at Community Centre 55 on Nov. 1, this has been his first Share A Christmas campaign.

“I’ve had a lot of support and many people have helped me to prepare for it, and it’s been a beautiful thing to experience.”

While this year’s Share A Christmas Program essentially wraps up with today’s deliveries, donations can still be made to Community Centre 55 by going to https://www.centre55.com/