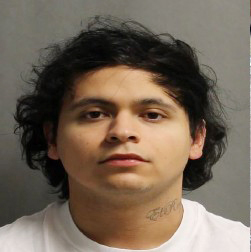 Toronto police said they are seeking Brandonn Sevilla-Zelaya, 25, on charges of assault causing bodily harm, robbery and uttering a threat.

According to police, a man boarded the subway at Kennedy Station at approximately 10 p.m. and then allegedly began an unprovoked attack on a man, hitting him with punches. Then at 11 p.m., police said a man was on a subway train at Kennedy Station when he allegedly attacked a female passenger by shaking her and then threatened and robbed the victim of her headphones.

Police said they are seeking Brandonn Sevilla-Zelaya, 25, on charges of assault causing bodily harm, robbery and uttering a threat.

He is described as five-feet, seven-inches tall, with a tattoo on his neck. He was wearing light blue jeans, black shoes, and a dark grey hoodie.

Police have released photos of him, and are hoping anyone with information on his whereabouts will contact police in 41 Division at 416-808-4100.

Police can also be contacted anonymously through Crime Stoppers at 416-222-8477 or online at https://www.222tips.com