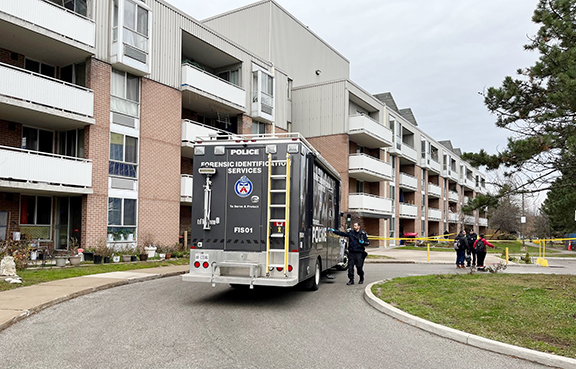 Toronto police investigate the stabbing death of a 57-year-old man at 1275 Danforth Ave. on the morning of Tuesday, Dec. 6. Photo by Alan Shackleton.

Two men have been arrested in connection with the stabbing death of a 57-year-old man who was found inside an apartment building on Danforth Avenue, just east of Greenwood Avenue, early on the morning of Tuesday, Dec. 6.

In a news releases issued this morning, Toronto police said Dylan Sherief, 30, has been arrested and charged with second-degree murder. Also arrested was Donivan Comeau, 23, who was charged with accessory after the fact to murder.

On Tuesday, Dec. 6, police were called to a low-rise apartment building at 1275 Danforth Ave. for reports of an injured man inside. Police officers found the man suffering from “obvious” trauma and he was rushed to hospital where he died that morning. The stabbing victim has been identified as Nicola Maioreno, 57.

It is believed that he was stabbed somewhere to the south of the apartment building and then made his way inside.