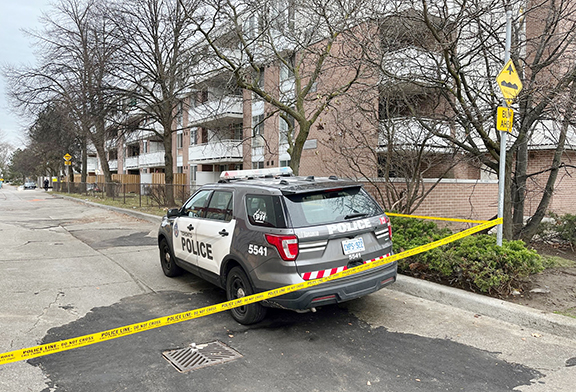 Toronto police had the area at the east side of 1275 Danforth Ave. blocked off on the morning of Tuesday, Dec. 6, as they investigated the stabbing death of a 57-year-old man earlier that day. Photo by Alan Shackleton.

Police have identified the victim of a fatal stabbing early on the morning of Tuesday, Dec. 6, in the Danforth and Greenwood avenues area.

Toronto resident Nicola Maioreno, 57, was found inside a building at 1275 Danforth Ave. at approximately 2:30 a.m. on Dec. 6 suffering from what police called obvious injuries. He was rushed to hospital where he died that morning of his injuries.

In a news release issued on Tuesday night, police said Maioreno was the victim of a stabbing.

The investigation is ongoing and police have not released any suspect (or suspects) descriptions at this time. It is believed Maioreno was attacked southeast of Danforth and Greenwood and then made his way to the building, but at this time no further information has been released on the circumstances of his death.

Police are appealing to anyone with information to come forward. This includes people in the area southeast of Danforth and Greenwood avenues that might have home security or dashcam footage from early this morning.