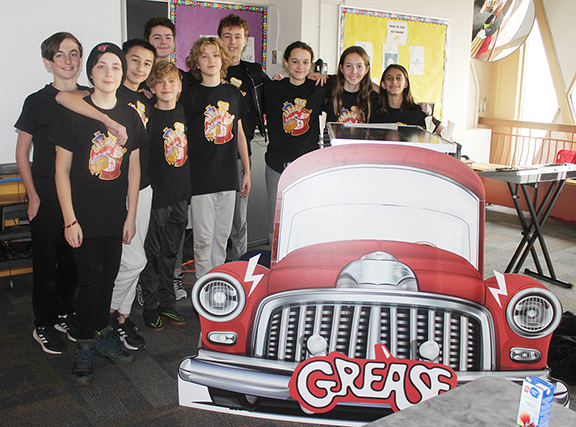 Team 458, as the Glen Ames students are known as, will be competing in the FLL regional championships this week.

The theme of this year’s FLL competition is Clean and Renewable Energy and school robotics teams from around the world are taking on that challenge, including the squad from Glen Ames.

The challenge Team 458 decided to tackle was how to build a self-charging electric vehicle. And so, with tributes paid to the movie and stage musical Grease, was created Greased Lightning.

The vehicle charges itself through solar power and small wind turbines which are attached to the vehicle.

“The power your supplying, is energizing,” sang and said Team 458 as it worked on the presentation it will give about their project at the FLL qualifying tournament on Dec. 7 in Sutton.

Since both power from the sun and wind are renewable and clean, the Glen Ames vehicle will eliminate reliance on fuel sources such as gasoline or having to constantly stop to recharge the battery from an electrical source.

“People are scared because of range anxiety,” said Glen Ames robotics student Karsen M. of the biggest concerns people have about buying electric or battery powered vehicles. Drivers are worried they will run out power and be stuck in the middle of nowhere without a way to recharge the vehicle.

“With wind and sun you are always charging and can go on your trip,” he explained.

So how does it work? The vehicle has small solar panels that can move around its surface following the sun during daylight hours to generate power. It will also have small turbines on the sides to collect wind power.

It’s the placement of the turbines sideways along the sides of the vehicle, as opposed to its front or roof, which will help take advantage of the wind power generated when the car is moving – so it is constantly charging itself while in motion – that makes the system work.

“It would be a drag to lose energy due to wind resistance,” said Team 458.

In FLL competitions, teams are judged on a number of factors beyond just their robotics work. One of those is how creative the teams are in their presentation of their idea, and Team 458 has a big (and musical) unveiling planned with Greased Lightning.

“We all like the movie, but we won’t be able to do quite the way did when singing Greased Lightning,” admitted Karsen.

For that, they’d need a full-sized car and the ability to lower an engine from the ceiling. However, their unveiling does promise to be entertaining.

Along with the creativity and robotics work of the students, Team 458 is coached by teacher Luke Martin at Glen Ames.

The school’s robotics program has a long history of success in FLL competition and of inspiring its students to follow careers in engineering and other science and technology fields.

One of those former students, who was on the Glen Ames robotics team in 2012, is Evan Neff. He recently was back at his former public school to help Team 458 with some 3D printing for their vehicle. Neff is now co-founder of a company called smartARM that uses 3D printing technology to create prosthetic arms.