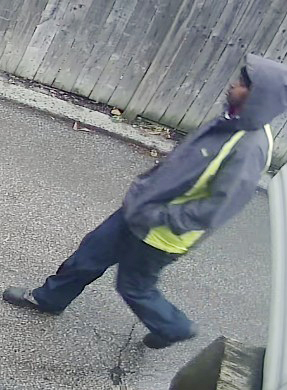 Police are looking to identify this man in connection with a number of alleged criminal harassment incidents in the Leslieville area in late November.

Toronto police are looking to identify a man wanted in connection with a number of alleged criminal harassment incidents in Leslieville recently.

According to police, incidents of a man following women and staring at young girls were reported on Nov. 25, Nov. 27 and Nov. 28 in the area.

In a news release on the afternoon of Friday, Dec. 2, police updated information they had previously made public earlier this week to include a total of four reported incidents.

Police said two of the incidents reported to them this week took place on Friday, Nov. 25.

In the first incident, police said a woman was walking her dog in the Queen Street East and Caroline Avenue area at 8:55 a.m. when a man began to follow her closely and stare at her. Police said the man fled the area when the woman went and spoke to a construction worker.

In the second incident on Nov. 25, police said a woman was walking her dog in the Queen Street East and Pape Avenue area at 5:36 p.m. when a man followed her into a building vesitbule. The woman was able to quickly get into the building and close the door behind her which stopped the man from entering, police said. The man fled when she used her cell phone to call a friend.

On Sunday, Nov. 27, police said a woman walking with three young girls in the Queen Street East and Jones Avenue area at 11:59 a.m. was followed by a man who was staring at the girls. The woman entered a nearby school yard to get away from the man and he fled when the woman used her cell phone to call a friend, police said.

Also on Nov. 27, police said a 13-year-old girl was walking in the Queen Street East and Pape Avenue area at 11:27 a.m. when she was followed by a man. Police said the man approached the house the girl went into and started banging on the door and ringing the doorbell.

The man is described as six-feet tall, with a medium build, 30 to 40-years-old. The man was last seen wearing large clothing, a grey hooded rain coat with neon green stripes, and dark shoes.

Updated images of the man have been released by police in hopes members of the public can identify him.