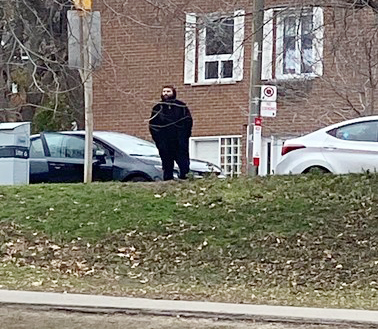 Police are looking to identify this man and the vehicle that has the open door in connection with an investigation into an alleged suspicious incident on the afternoon of Tuesday, Nov. 29, near Bowmore Junior and Senior Public School.

Toronto police are seeking the public’s assistance in identifying a man and vehicle in connection with an investigation into an alleged suspicious incident near Bowmore Junior and Senior Public School earlier this week.

On Tuesday, Nov. 29, officers responded to a call for a suspicious incident in the Gerrard Street East and Beaton Avenue area, which is east of Coxwell Avenue.

According to a police news release issued on the afternoon of Dec. 1, three students who were in the school yard as part of a gym class observed a man standing next to a vehicle on Gerrard Street East at approximately 1 p.m.

Police said the door of the vehicle was open and the man was observed waving towards students in the school yard. The man then appeared to be motioning towards the car’s open door and possibly taking pictures with his phone, police alleged.

The man then left in the vehicle and was last seen going eastbound on Gerrard Street East.

The man is described as six-feet tall, with a heavy build, black hair and black shaggy beard.  He was wearing a black jacket or sweater and black pants.

Police said the vehicle is a black four-door sedan, of unknown make or model.