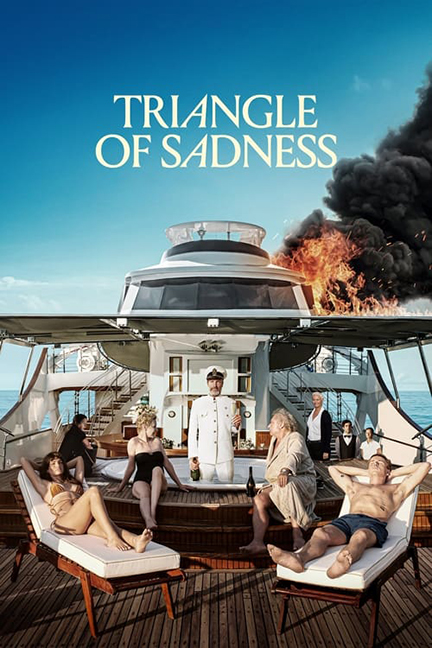 Local student Brady Burkett shares his reviews of upcoming movies showing at the Fox Theatre on Queen Street East in the Beach. Here is his review of Don’t Worry Darling.

Ruben Östlund’s new film Triangle of Sadness is a somewhat complicated and somewhat embarrassing film to attempt to review.

Anyone watching a movie can form an opinion on it, but it’s the job of a critic to deign to do so in as objective a fashion as possible, looking at the filmmaking from a technical standpoint in order to justify your own emotions towards the movie, such that people can then take your criticism seriously. It’s one thing to call The Shawshank Redemption a masterpiece; it’s another to provide evidence for that claim, by pointing out the wonderful performances, gripping story, and brilliant ending that ties the entire film together. It is this distinction that separates the moviegoer from the critic.

And with this lengthy introduction out of the way, we come back to Triangle of Sadness, a film that locks the moviegoer and the critic within me in an inextricable battle with one another.

Because by all objective standards, Triangle of Sadness is not a very good movie. That’s not to say that it’s bad, exactly; there are some standout scenes. However, the film has several flaws that are, for me, impossible to ignore, and its objective quality amounts to what is most likely an “alright” at the very best. And yet, I can’t pass it off as merely “alright”, because Triangle of Sadness has an odd magic to it that I simply can’t ignore. It inexplicably, impossibly works, in a way that I can’t quite describe. Can you see why this is somewhat embarrassing to review as a critic?

But I’m getting ahead of myself here. Triangle of Sadness, once it finally gets going (which we’ll discuss later), is the story of an ensemble of rich assholes on a luxury yacht, the ship’s crew being forced to comply with their every completely ridiculous request, and how the relaxing cruise ultimately takes a turn for the worse, and worse, and worse, and ever worse.

It’s an excellent, incredibly funny concept, but the film never seems to fully explore its potential. For one, the social commentary itself is rather surface-level and immediately obvious. That’s not to say that it’s necessarily bad, but it absolutely does not reach the depth that it could. This is partially thanks to what is most likely the film’s biggest flaw: its pacing.

Triangle of Sadness is divided into three parts, and all of them are about half an hour longer than they should be. Jokes that are initially funny often overstay their welcome. This could be a very tight, very funny hour-and-a-half, but instead it ends up being a thinly stretched two-and-a-half.

The incredibly slow pacing does work well with some jokes, however; there’s a particularly brilliant moment in which one of the rich women orders that all of the crew members “take a break” and go for a swim, which ultimately only causes them a massive deal of trouble as they are forced to upend their entire schedule to make it work. Watching one crew member’s utter desperation at wanting to say “no” but being unable to is hysterically, painfully palpable.

The film does have a large amount of other positive aspects. The performances are excellent across the board, without a weak link among them (the highlight being the unfortunately underutilized Woody Harrelson as the captain). The cinematography is brilliant, taking a fascinating stylistic approach as the camera acts as a distant fly on the wall at almost all times. The film features very few closeups, and cuts extremely rarely, and yet it somehow only accentuates the uncomfortable claustrophobia of the setting. The color grading, something that I don’t normally focus on when watching a movie, is also excellent, giving everything a constant twinge of sunburned red and sickly brown that makes everyone look just a little off.

There are tons of elements that do work really well, but then the film’s other massive problem, aside from the pacing, rears its head: lack of focus. A lot of the scenes are singularly really excellent, but nothing quite hangs together. Subplots are started and dropped seemingly at random. Entire characters add nothing to the story or are introduced without proper setup. The film spends its entire first 30 minutes setting up two characters who are relegated to another part of the ensemble for the entire rest of the movie. The ending is so abrupt that I, quite literally, did not realize that it was even close to ending until the second the credits appeared (although admittedly, this was most likely intentional).

And yet. And yet, and yet. Despite this movie’s many gaping flaws, despite its surface-level commentary, awful pacing, and messy script, it all, as I said before, inexplicably, impossibly, magically works, in a way I can’t quite describe.

And the only explanation that I can conceive of why I enjoy this film so much, despite its massive issues, is that it’s quite simply fun. Everyone involved is clearly having the time of their lives, and that energy somewhat infectiously translates off of the screen and to the audience.

Overall, Triangle of Sadness is an immensely flawed, but also immensely fun satire that I have to somewhat tentatively recommend. Not everyone will like it, but those who will will understand exactly what I’m talking about.

Triangle of Sadness is scheduled to play the Fox Theatre, 2236 Queen St. E., on the nights of Nov. 29, Dec. 6 and Dec. 8.  For more information on upcoming films playing at the Fox, please visit https://www.foxtheatre.ca