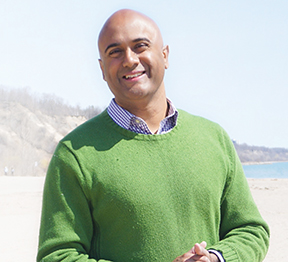 Parthi Kandavel, who finished second to incumbent Gary Crawford in the race for the Ward 20 Scarborough Southwest councillor seat, has filed a complaint with the city's integrity commissioner over robocalls made during the campaign by Mayor John Tory. Photo: Submitted.

Scarborough Southwest councillor candidate Parthi Kandavel has filed a complaint against Mayor John Tory in a letter addressed to Toronto’s Office of the Integrity Commissioner on Monday, Nov. 21.

The former candidate for Toronto City Council, who left his position as a Toronto District School Board trustee to run for the office, is accusing Tory of using his position as incumbent Mayor of Toronto to influence the Ward 20 Scarborough Southwest election race.

Kandavel lost the election for the council seat, garnering 30 percent of the votes while incumbent Gary Crawford was re-elected with 35 percent of voter support in Scarborough Southwest.

The complaint, which was filed by Paul-Erik Veel on behalf of Kandavel, argues that Tory violated sections 7.1 and 8.0 of the Code of Conduct for Members of Council by “improperly using the influence of his office when he referred to himself as “Mayor John Tory” in a robocall in support of the election campaign of Gary Crawford”.

“On election day, voters in Scarborough Southwest received robocalls that played an  automated message from John Tory,” said Veel in his letter to the Integrity Commissioner.

According to the letter of complaint, Tory’s automated call began with a greeting that said “Hello, this is Mayor John Tory, calling on behalf of Councillor Gary Crawford’s re-election campaign”. He then proceeded to urge residents to vote for Crawford insisting that the Incumbent Scarborough Southwest Councillor had “his full support”.

Kandavel’s accusation lies in the fact that Sections 7.1 and 8.0 of the Code of Conduct prohibits Members of Council from using any resources or privileges available to them by virtue of their office to further private interests. In this case, Kandavel is arguing that the title of Mayor is a powerful City owned resource that was used to sway voters into voting against him.

“This is not about the outcome of this one election, but rather about the spirit of Toronto’s local democracy and the integrity of our public officials,” said Kandavel in a press release. “The City’s own Code of Conduct for elected officials clearly states that ‘using their official position to improperly influence electors’ is prohibited.”

Along with the alleged misuse of Mayoral status, Kandavel complaint is accusing Tory of splitting the votes by misinforming residents, through the robocall, that Ward 20’s electoral race was a tight one between Crawford and two other candidates who were, in fact, trailing far behind in third and fourth place.

According to the complaint, this prompted voters who did not want Crawford to win to vote for the third and fourth place candidates when, in actuality, Khandavel would have received these votes had they known he was the real contender on election day.

None of the allegations in the complaint have been proven.

The mayor’s office told CP24 this week that they had received a copy of the complaint. “The Mayor respects the Integrity Commissioner and his process, and in consideration of this, we will not be making further comment at this time,” said Don Peat.

Toronto’s Integrity Commissioner, Jonathan Batty, is yet to make a decision on whether the complaint will be investigated.