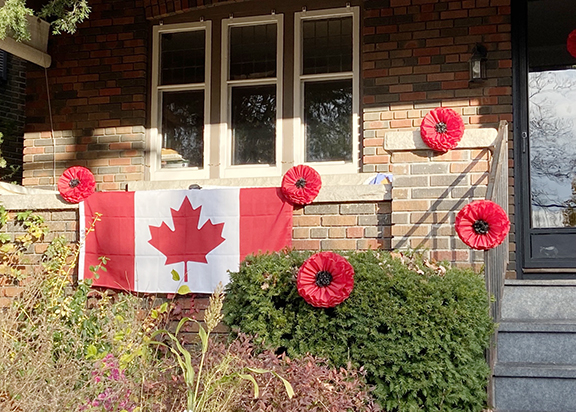 Large tissue paper door poppies are displayed on Margot Rockett's Beach area home this month. The Canadian flag displayed is the one given to her family upon her father's death in 2019 at the Sunnybrook Veterans Centre in Toronto. Photo: Submitted.

A year ago, Beach resident Margot Rockett was overwhelmed by the interest of people from across North America in the tissue paper door poppies she had been making for community residents in advance of Remembrance Day.

Since 2020, she has been making the large paper poppies which can be displayed on doors, porches or windows of local residences. She sells them for $10 and donates the money to the Royal Canadian Legion’s Poppy Fund.

Thanks to national news coverage in early November of 2021 about her door poppies, Rockett received thousands of texts from people wanting to buy them. However, the 100 she had made had already been sold to local residents and she was unable to respond to the flood of requests for them.

This year, anticipating there would be a much larger and wider demand for them, Rockett made more than 500, and counting, and also set up an email for people to contact her regarding the ordering of them. They still cost $10 but people are often making an additional contribution, Rockett told Beach Metro Community News this week, since the money goes to the Legion’s Poppy Fund

Also new for 2022, was that Rockett received a licence from the Royal Canadian Legion to sell her door poppies in support of The Poppy Fund.

“I received a license from the Legion in Ottawa to sell them again this year, which was hard to get and I was very grateful,” she said.

She said the Legion is extremely careful about allowing the trademarked Poppy image to be used in ways that do not support The Poppy Fund.

The Legion has trademarked the Poppy so it cannot be used in ways that do not raise funds for services it provides for veterans and their families. “On June 30, 1948, on behalf of the people of Canada, the Legion was given the responsibility to safeguard the Poppy as a sacred symbol of Remembrance, a symbol of the sacrifice of our Veterans. The Legion ensures that the Poppy is not used for commercial or personal gain, and that it be protected from inappropriate use. It is for these reasons that the Legion requires permission for the use of the trademark Poppy, or the Poppy image as it relates to Remembrance,” says the Legion’s website.

For more on how The Poppy Fund supports veterans, please go to https://www.legion.ca/remembrance/the-poppy-campaign/use-of-the-poppy-funds

For more information on the tissue paper poppies made by Rockett and how to order them in advance for next year, please send her an email at doorpoppies@gmail.com

See our earlier story for more on Rockett and the large tissue paper poppies: https://beachmetro.com/2021/11/05/beach-resident-completely-overwhelmed-with-orders-for-large-tissue-paper-poppies-after-story-runs-nationally/