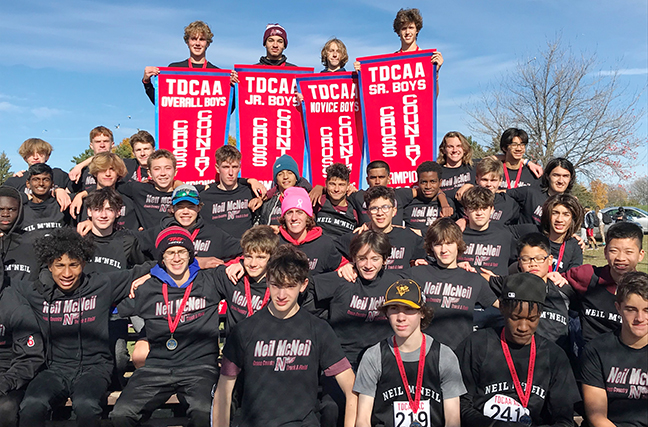 For the 14th year in a row, the boys from Neil McNeil Catholic High School have won the overall team title at the Toronto District Catholic (Colleges) Athletic Association cross country championships.

This year’s meet was held at Centennial Park in Etobicoke on Friday, Oct. 28.

Also, for the third time in a row Neil McNeil won the team title in all three age groups (Novice, Junior and Senior) competed in at the championships.

Cecil Jenkins won gold in the Novice boys race, and the silver went to his teammate Ty Machado. Finn Veale was fourth in the race for Neil McNeil and Owen Mielniczuk was sixth. In the Novice race, Neil McNeil had eight runners finish in the top 20.

The Senior boys were led to their team tile by Fitz Williams, fourth; Jamie Parkin, sixth; Ewen Fraser, eighth; and Noah McPherson, ninth. The team had 11 runners finish in the top 20 in the race.

“For the 14th consecutive year Neil won the Overall Title and swept all three age groups (at the city championships),” said coach Steve Masterson. “The coaching staff is very proud of the fact that Neil has qualified 42 of 42 teams to OFSAA during that time period.”