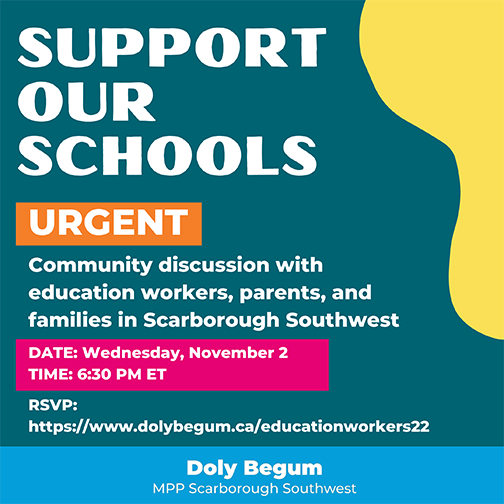 The Ontario NDP Member of Provincial Parliament for Scarborough Southwest, Doly Begum, is hosting an emergency virtual town hall at 6:30 p.m. today (Wednesday, Nov. 2) for riding residents to discuss the ongoing dispute between the provincial government and education workers.

The Canadian Union of Public Employees (CUPE), which represents custodians, early childhood educators, education assistants, and administrative assistants working in schools will be in a strike position as of Friday, Nov. 4. This has led the Progressive Conservative government of Premier Doug Ford to introduce Bill 28 in the Ontario legislature at Queen’s Park this week. The bill will legislate a contract on the union and ban the workers from striking by invoking the notwithstanding clause in the Canadian Charter of Rights and Freedoms.

Begum, a deputy leader of the Ontario NDP which is the Official Opposition at Queen’s Park, said it is important for residents to get more information about this legislation and its impact on CUPE and schools.

“This is not about teachers. The government has often mentioned teachers – but those who are seeking the opportunity for a fair negotiation are not teachers. It is very important that we remember who these education workers are – these are 55,000 of some of the lowest paid workers in our education system,” said Begum.

CUPE is seeking an 11.7 per cent annual raise for the 55,000 workers they represent. According to CUPE, their average worker makes about $40,000 annually, a figure that has remained stagnant for many years. The union’s proposed increase in salary would see workers earn $4,800 extra annually. While there has been criticism of the percentage amount of increase they are seeking, CUPE maintains they are trying to make up for the fact that between 2012 and 2021 the education workers’ wages increased by only 8.5 per cent while inflation has risen by 17.8 per cent.

Begum said it is important for parents to know that the schools they send their children to are well resourced.

“From keeping the classrooms cleaned to helping our kids with special needs, these workers keep our schools functioning,” she said. “Parents do not want the people who care for their children to not be able to put food on the table.”

The provincial government’s latest offer was a 2.5 per cent annual salary increase to workers making less than $43,000, and 1.5 per cent for workers above that pay grade. This equates to an average salary increase of about $1,000 per year ($83 per month). Given the current state of Ontario’s economy, many view this as an insignificant amount.

The use of the notwithstanding clause in Bill 28 to deal with a labour dispute has been publicly condemned by Prime Minister Justin Trudeau.

It has also led to furious debate at Queen’s Park as the ruling Progressive Conservatives seek to push the legislation through before Nov. 4, which would make a strike by CUPE illegal. At Queen’s Park earlier today, 16 NDP members were removed from the legislature for accusations they made toward Premier Ford. Those made to leave today’s session for accusing  Premier Ford of lying included Peter Tabuns, the interim leader of the Ontario NDP and the MPP for Toronto-Danforth.

“The Ford government’s decision to introduce Bill 28, which tramples on the rights of education workers – some of the lowest paid workers in our education system – is not only cruel and harmful to so many workers in our province, but also unconstitutional,” said Begum.

The notwithstanding clause (Section 33 of the Charter of Rights and Freedoms) gives provincial legislatures the ability to override certain portions of the charter for a five-year term. This essentially takes away the workers’ constitutional rights of collective bargaining and to strike when necessary.

During Bill 28’s effective period, strikes and lockouts are prohibited and can carry a fine of up to $4,000 per day for any worker who participates – almost as much as the annual salary increase CUPE has asked for.

Anyone who would like to learn more and further discuss the issue can do so by signing up for Begum’s townhall at https://www.dolybegum.ca/educationworkers22