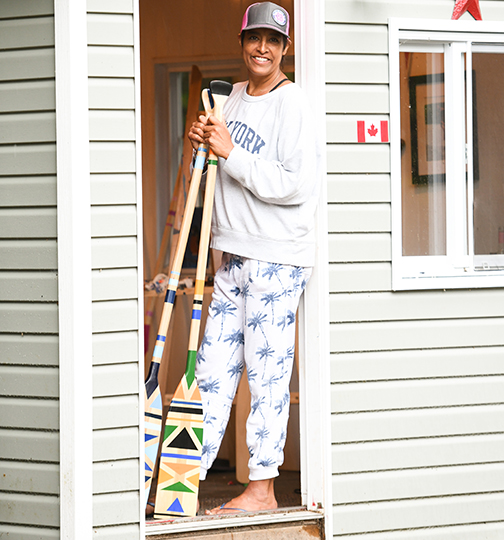 Sarah McComb, shown with her painted paddles, will be remembered at the Rock with Love fundraiser in early November to support cancer research. Photo: Submitted.

The family and friends of Sarah McComb will hold the first annual Rock with Love, a concert in her honour with the proceeds going towards the Sarah McComb Benefit Fund to support cancer research.

Sarah passed away on Sept. 19, 2021 following her second bout with breast cancer. She is survived by her husband, Wes McComb, four children as well as both parents and her sister, Ciara.

Rock with Love will be held at the Opera House on Queen Street East on Saturday, Nov. 5, with doors opening at 7 p.m.

An avid fan of both rock music and attending concerts, Sarah’s family felt that Rock with Love would be the perfect way to honour her memory.

Sarah was an integral part of the Beach community as a mother, swim coach, substitute teacher, a Brown Owl for the Girl Guides and more, said Wes. “She was always very children oriented,” he said.

Although Sarah stayed at home to raise their children, she began teacher’s college as soon as her youngest began Kindergarten. Shortly thereafter she began as a substitute teacher at the school her children attended, St. Denis Catholic School in the Beach.

“It was a perfect gig for her,” said Wes. “She worked when she wanted to and she knew all the teachers and the kids in her class. She loved teaching and she loved kids, right? That was her whole thing.”

As a substitute teacher, Sarah taught all the different grades and so following her passing, they all made commemorative art which Sarah’s family has kept.

“She was very, very art oriented,” said Wes. “A lot of her last endeavours there in the last couple of years were her painting paddles.”

Despite a familial history of cancer, Sarah’s initial diagnosis did come as a shock given her active lifestyle.

“It couldn’t be cancer, according to the doctors, because she was healthy, breastfed the children and all the other indicators,” said Wes. “She did the radiation, the chemo and had the operation to take the lump out.”

“Everything was fine,” he continued. “And then it came back again, seven years later.”

Despite the news, Sarah was courageous and stoic in the face of her initial diagnosis as well as its resurgence.

As a means of documenting her journey as well as to inspire others, Sarah created and operated the Instagram account, 2ndjourneythroughcancer.

Much of the aforementioned art and decorative panels can also be seen there as well.

Sarah had such an effect on the community that an ongoing initiative, supported by Beaches-East York MPP Mary-Margaret McMahon, is underway to rename a laneway north of Queen Street East as the Sarah McComb Lane.

As embedded as she was in the community, Sarah had just as deep a relationship with the St. Michael’s Hospital.

Not only was it the hospital where her father completed his internship, it is where her siblings and children were born as well as where she received a majority of her treatment for breast cancer.

The McCombs were also involved with the Angel’s Den program at St. Michael’s, with Wes on the organizing committee for the past five years.

A twist on the popular Dragon’s Den series, Angel’s Den provides initial funding for clinicians and researchers so that they can create a prototype in the hopes of securing additional funding. With an initial goal of between $100,000 and $150,000, the response to Rock with Love has been exceptional, said Wes.

“It’s a double whammy for her,” continued Wes. “She would’ve loved to have a party or musical concert in her name. She would love that. And then also getting to fund cancer research at St Mike’s is another thing she would have been ecstatic about.”

To purchase tickets to Rock with Love, please go to https://secure3.convio.net/smh/site/Calendar/1193076141?view=Detail&id=101421 or visit the Instagram account at www.instagram.com/rockwithlove1/