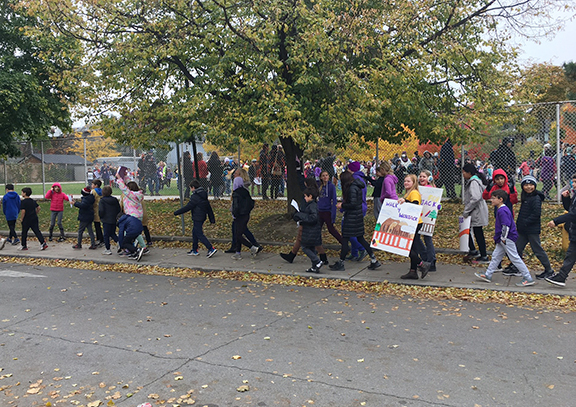 Students at Jackman Avenue Junior Public School participated in a walk in honour of Chanie Wenjack, a nine-year-old Anishinaabe child who escaped one of Canada’s infamous residential schools in 1966 but died while trying to make his way home.

“I feel like the story of Chanie Wenjack has been something that has enriched the learning that we’ve done over the years here at Jackman around Truth and Reconciliation,” said Jackman’s vice-principal, Moira Brummell.

The Thursday, Oct. 20, walk began with two students reciting the Land Acknowledgment to their peers. A teacher, Zoe Rankin, then addressed the crowd with notes about what the day was about.

“It is estimated that between the early 1880s and 1996 over 150,000 Indigenous children were systematically taken from their families,” Rankin told the students who were gathered on the Jackman field.

“They were sent away to residential schools run by church organizations and funded by the Canadian government.”

She further explained to the students the methods used to strip these residential school students of their culture. As she read her speech, in which she revealed how Wenjack’s journey ended, she was noticeably shaken by the damage inflicted upon the residential school victims as her voice crackled while tears brewed in her eyes before she exited the stage.

Following his escape from the school in the northwestern Ontario town of Kenora, Wenjack attempted to walk home to Ogoki Post, an Indigenous community located 600 kilometres from the residential school he was forced to live in. His body, Rankin said, was found a week later on Oct. 22, 1966 having succumbed to starvation and exposure.

To commemorate his journey, the approximately 600 Jackman students gathered then walked one kilometre each on the streets surrounding their East Toronto school.

During the walk, a section from the group chanted “Walk for Wenjack” in a manner that persisted for the majority of the 20-minute walk. Other students sporadically shouted the same slogan to make passersby aware of the purpose of the walk.

The intent of Thursday’s walk was to both gain ground in Canada’s road to Truth and Reconciliation, as well as to raise money for the Downie & Wenjack Fund.

Gord Downie is the late lead singer of Canadian rock band The Tragically Hip. He died on Oct. 17, 2017 from brain cancer.

“The Downie & Wenjack Fund is part of Gord Downie’s legacy and embodies his commitment, and that of his family, to improving the lives of Indigenous peoples in Canada,” said Rankin. “This charity aims to build cultural understanding and creative paths towards reconciliation between non-Indigenous peoples.”

For more information on the Fund, or to donate, please go to https://downiewenjack.ca/our-story/